Merrimack College professor Dan Butin has been named to the Top 200 list of education scholars in the latest Edu-Scholar Public Presence Rankings for the fourth straight year. 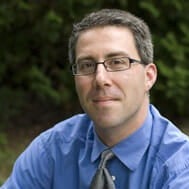 Butin is ranked no. 88 on the newly released list. He was 112th last year.

“The individuals on the list are top notch, so it’s wonderful to be in that company,” said Butin, the founding dean of Merrimack’s School of Education & Social Policy, who recently returned to the faculty after serving as dean for six years.

“These are folks who are prominent in the field, make a real contribution to the public dialogue, and I’m trying to do my piece as well.”

Provost Carol Glod called Butin an outstanding scholar and one of Merrimack’s top scholars who has brought honor to the school.

“This brings great recognition and validity to what Dan does but also enhances our reputation nationally,” she said.

Academics from more than 50 universities were named to this year’s list. Butin is the only scholar from a small liberal arts college.

Hess used eight metrics to calculate how much the professors moved ideas from the realm of academic journals and into the national conversation.

“One small way to encourage academics to step into the fray and revisit the academic norms is, I think, by doing more to recognize and value those scholars who engage in public discourse,” Hess said. “These results offer insight into how scholars in a field of public concern are influencing thinking and the national discourse.”

Butin fully supports the list as a means of sharing the work scholars are doing in the halls of academia. Academics need to make real attempts to translate their work to the sphere of the general public, he said.

There are over 20,000 university-based faculty addressing educational issues in the United States so making the Edu-Scholar list is an honor and cracking the top 100 is an accomplishment in its own right, Hess said in a blog entry.

He has written eight books, including three that have been, or soon will be, translated to other languages.

Butin is executive director of the Center for Engaged Democracy and blogs at the Huffington Post.

He has worked as a consultant for the U.S. Department of Education, the National Science Foundation, Massachusetts Institute of Technology, and the Association of American Colleges & Universities.

Butin is an internationally recognized expert on the rise of digital learning technologies, community engagement, as well as teacher preparation and policy.