There will seemingly be more bridges on the Merrimack College campus than the New York skyline as the school hosts the New England Regional Steel Bridge competition inside J. Thomas Lawler Arena on April 10 and 11. 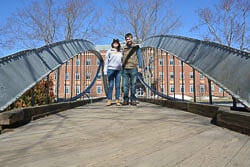 There can be nuances of classwork that students don’t fully understand until they start to build something so the competition extends their academic work, Veletzos said.

The American Society of Civil Engineers and the American Institute of Steel Construction are sponsoring the event.

The planning committee is led by chairman Kristen Page ’16, of Worcester, Mass., and vice chairman Jared Peterson ’16, of Westford, Mass. There are about 18 members to the team.

“Overall, we think we have a great competition put together,” Page said.

Each team must design and build a steel bridge. Scoring will be based on factors such as assembly time, the weight, bridge efficiency, the cost, and deflection, Page said. Each team in the competition must built their segmented bridges to hold a load of at least 2,500 pounds.

“They want to simulate a scenario as realistic as possible,” Peterson said.

The competition will start with judging of aesthetics along the perimeter of rhw arena. The teams will have to take down their bridges and reassemble them in the center of the arena for further judging, Veletzos said.

Merrimack’s team has built a truss bridge about 20 feet long to put up against some of the best collegiate engineering departments in the region.

As part of the competition, Leyna Tobey ’17, of Augusta, Maine is writing the team’s 2,000-word paper on the morals and ethics of the field that will be presented April 10.

“There are tons of students who have pulled all-nighters to get this done and finished,” Peterson of the planning and construction. “It definitely takes a village.”

At least three of the bridges for schools that entered the competition collapsed during testing, but Merrimack’s has held up well, Page and Peterson said.

Merrimack placed fourth last year with a platform bridge and this year decided to go with an up-and-over truss bridge.

“We fabricate our own bridge,” Page said. “All students fabricate, weld and drill cut.”

Planning for the competition started about a year ago, and construction of the Merrimack bridge began around September. Students have been working in the Austin Hall garage, getting guidance from the department’s machinist technician, Doug Therrien.

The team designed the bridge for Veletzos’ structural analysis class last year and then he shepherded the project.

“We couldn’t have done it without him,” Page said. “He’s gotten us through more hoops with things like dealing with the college.”

Alumni President Chris Cole ’04 also served as a driving force for the planning stages, collecting information about the competition, getting banners made, gathering volunteers to work this weekend; and coordinating with judges and alumni.

Merrimack will have to overcome recent history to do better than last year’s fourth place finish and reach one of the top three spots to qualify for the national, Veletzos said. Schools that host the event normally spend so much time and energy on the logistics of putting on the competition that their entries suffer.

“We’ll see how we do this year,” Veletzos said. “It’s sort of the hometown curse but I’m hoping we break it this year.”

The competition is dedicated to Jordan Bedard ’16, who was the team captain for construction before his untimely death last fall.