The next time you watch a woozy football player helped off the field after a crushing blow, take comfort in knowing a Merrimack College alumnus helped develop the NFL's concussion evaluation program for retirees. 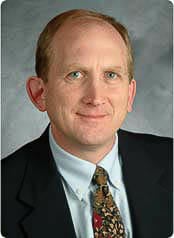 Dr. Thomas Sullivan ’85, team neuropsychologist for the NFL’s Cincinnati Bengals since 1998, has evaluated all players as they joined the Bengals, including such stars as Carson Palmer, Terrell Owens and Chad “Ochocinco” Johnson.

“I do testing to see how well they remember, pay attention, think through different tasks; all these things that are very sensitive to concussions,” said Sullivan.

That way, he can recognize differences between a player’s normal and altered behavior when diagnosing them with a concussion.

Players suspected of having been concussed on a given Sunday during the season visit Sullivan on the next Tuesday for diagnosis.

A player whom he didn’t identify visited his office last season and it was quickly obvious he was concussed.

“It was very easy for me to know when he was symptomatic to a concussion because I know him,” Sullivan said. “I talked to him and I’m like, ‘oh, he’s not like he usually is.’ He’s charismatic, usually, but by Tuesday he’s dour, unhappy, quiet.”

“It’s very nice if your doctor knows you.”

Sullivan said he’s not surprised the number of reported concussions among players rose this season, because the NFL is looking for symptoms of concussed players more than ever.

There are now neurologists on both 20-yard lines and a spotter with binoculars sitting in the press booth watching for players showing signs of concussions. The neuropsychologists working for individual teams help develop treatment plans for concussed players and determine when they can return to the field.

The Pittsburgh Steelers were the first team with a neuropsychologist consulting with the team in the mid-1990s. It was soon followed by the New York Jets, who didn’t know how long to keep quarterback Boomer Esiason out of games after a concussion.

Sullivan suggested Wes Houston as his successor with the Bengals and when he returned to the team in 2013 the two assumed co-director roles.

Sullivan, whose hockey career was cut short before he could pull on a sweater for the Warriors, has also consulted with the NHL’s Mighty Ducks’ American Hockey League affiliate.

Sullivan grew up in Brunswick, Maine when Merrimack and Bowdoin College were fierce ECAC rivals. He listened to their games on the radio but didn’t plan to attend college in North Andover until fate intervened.

Sullivan was playing junior hockey in Canada when his mother called to ask a favor one day — apply to Merrimack, because it was a Division II school at the time, which would allow more time for studying, and it was only a few hours from home. Also, “She said, ‘Merrimack is a nice Catholic college,’” Sullivan recalled.

He had dreams of playing Division 1 hockey so he wasn’t excited by Merrimack and filled out his application in longhand, in pencil. About a month later he suffered a career-ending leg injury and was sitting at home with his leg in a brace in 1981 when Merrimack’s acceptance letter arrived. “Merrimack was a complete turning point in life for me,” Sullivan said. “It was fantastic. It was the best thing ever.”

He had a double major in English and psychology. Without hockey he had more time to study and develop rapports with his professors so his grades flourished.

As a consultant he has helped Woburn, Mass.-based Aptima Inc. design software to help rehabilitate members of the U.S. armed services who sustained traumatic brain injuries.