Merrimack grad on front line of battle against Ebola

Dr. Nancy J. Sullivan '80 has been studying the Ebola virus since 1998, and is on the cusp of a potential breakthrough in preventing the illness. 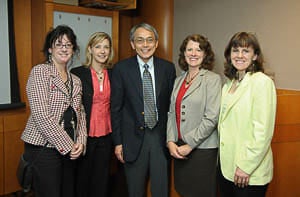 She and other officials at the National Institutes of Health are hoping the vaccine Sullivan created to fight the lethal disease makes it through clinical trials successfully, so it can be rushed into service to help prevent spread of the virus throughout the world.

She has fond memories of her four years at Merrimack and credits the caring atmosphere and her professors for leading her to the scientific field.

“I made very good, lifelong friendships when I was there and enjoyed spending time with my classmates,” Sullivan said. “The faculty were great, the priests were great. Mass was always supportive for us and the homilies were often tailored to the students. It was obvious they took time to write the homilies to support the students.”

The Wilmington, Mass native commuted to school the first couple of years, but lived on campus her junior and senior years.

She was initially reluctant to apply to the college because it was so close to her childhood home, but it didn’t take long after arriving on campus that it was a good choice.

“I don’t have anything I would change about my time at Merrimack,” Sullivan said.

Sullivan still has family in Greater Boston and normally visits the region about every eight weeks, but has stayed close to work since the Ebola outbreak. She hasn’t been to Massachusetts since Easter, she said.

Her last visit to campus was in 2010 and she was surprised by the changes since her days as an underclassman.

She arrived on Merrimack’s campus as a liberal arts major because her SAT scores were considered a little too low to enroll as a biology major.

“The lesson there is don’t judge a book by its cover,” Sullivan said. “Someone, maybe in Admissions, recognized that there was some potential.”

The school’s size lets professors get to know the students in ways bigger schools can’t and that proved to a life-changing factor, Sullivan said.

She caught the attention of biochemistry professor Dr. George Wermers, who recognized Sullivan’s scientific aptitude and guided her toward a career in science.

When she considered a career as a veterinarian, Wermers said he saw a different future for her and pointed out Sullivan’s aptitude for research in basic science.

After graduation, Sullivan went to work as a lab technician for a few years but even then the faculty encouraged her to attend graduate school.

Sullivan earned a master’s degree in environmental engineering and then a doctorate in cell biology at Harvard University. She studied HIV while working on her doctorate but Sullivan shifted the focus of her post-doctoral research to the Ebola virus to broaden her expertise in 1998.

“Ebola is somewhat like HIV” Sullivan said. “There are similarities in the virus outer structure and proteins.”

Studying Ebola also offered the chance for significant contributions to science since there were so few researchers in the field.

Her research can take incremental steps forward then use all those pieces to make a significant stride, Sullivan said.

“It’s a continuum, because at some point many small experiments add up to form new hypothesis or reveal something really important,” she said.

After Harvard she worked as a research fellow at the University of Michigan Medical Center’s Internal Medicines Department from 1998-1999 before moving to NIH.

Plans were made last year to begin a clinical trial with her vaccine at the NIH in December 2014 but the VRC worked with the U.S. Food and Drug Administration to accelerate approval because of the Ebola outbreak in Africa. The trial began in September.

The vaccine is already in Phase 1 clinical trials to evaluate safety at NIH, at the University of Maryland, and Oxford University in England. Additional trials are planned at Emory University in Atlanta, Switzerland, Mali and Uganda.

It’s hard to predict how long the clinical trials will last.

Everyone is working very hard to complete the trials as quickly as possible,” Sullivan said.