Graduates may feel this is the crowning moment of their lives but there are many successes yet to come in their lives ahead, said Massachusetts Gov. Charlie Baker, keynote speaker for Merrimack College's 66th annual undergraduate commencement exercises on May 22. 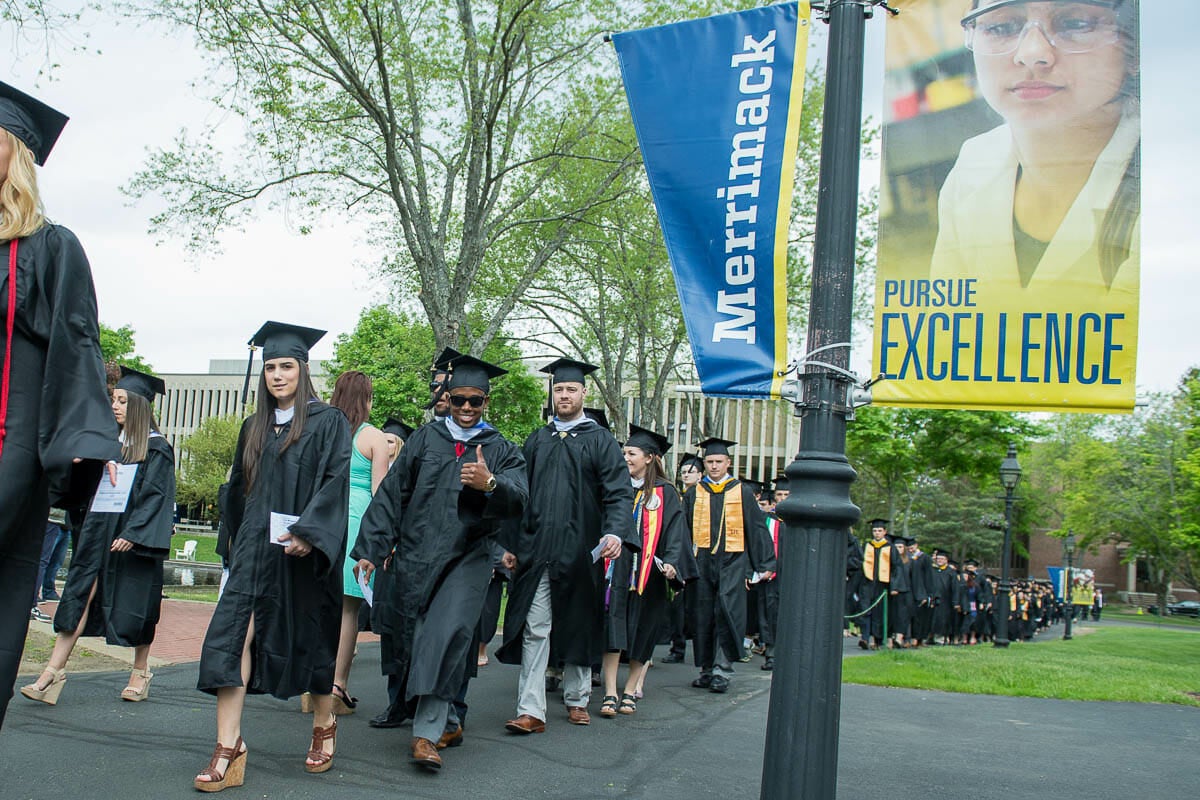 Each person needs to pick the choices that make the biggest difference in ways that suit him or her, the governor told graduating seniors and their families and friends.

“You are at the start of invigorating and exciting chapters to your time here on earth,” Baker said. “The fun is really about to begin.”

The college’s four schools awarded degrees to 687 students, who participated in a commencement ceremony that was filled with cheers, shouts of joys and plenty of laughter. “This is a special moment in your lives, and together we mark your success,” said college President Christopher E. Hopey, Ph.D.

Each graduate is likely to have a succession of jobs as they go through their careers, Baker said. Each experience can make a person better. He’s had 14 jobs since college and losing the gubernatorial race to former Gov. Deval Patrick in 2010 prepared him for his winning campaign in 2014, Baker said.

The former head of Harvard Pilgrim Health Care, urged the graduates not to be so focused on careers that they forget to take care of themselves.

“I want all of you to lead healthy and productive lives, but to get there over the next 40 to 50 years you have to take care of yourself,” he said.

Student speaker Anthony Preston compared college to a rollercoaster ride, at the end of which everybody exited with thrilling memories, ready for the next adventure.

Parents dropped off their children for their freshman year and for many, the ride started with a sudden dropoff in their sense of security but after twists and turns, ups and downs, it was time to get off the ride that seemed to go by in the blink of an eye, he said.

After Preston admitted he met Baker in a receiving line in December, but was too nervous to to take a picture with him or utter anything more than “Merry Christmas,” the governor stood up and took a selfie with the new graduate, which earned huge cheers from the packed house at Lawler Rink.

Business major Lauren Witzgall of North Reading, Mass., graduated with a degree in sports management. After a summer internship in the public relations department at the Boston Red Sox’ Single-A affiliate Lowell Spinners she plans to start work at the Disney College Program in Florida.

“I’m nervous and excited,” Witzgall said as she waited to leave Lawler Rink. “I’m excited for new opportunities and next steps.

Business major Augusto Silva, of Hudson, Mass., who also graduated with a degree in sports management, will start working in investment services at State Street in Boston in June and is leaving college with mixed emotions.