Merrimack College's Patrick Gillespie '16 and Luis Guerrero '17, finished the first day of the 2015 American Moot Court Collegiate Association National Invitational in Chicago recently ranked third before narrowly losing in the round of 16 the next day. 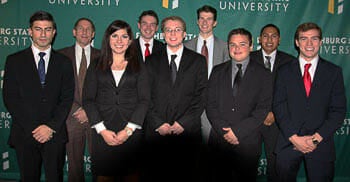 The invitational is roughly equivalent to the collegiate basketball’s NIT tournament next to the NCAA tournament.

“I loved it, I loved the competition, Gillespie said after returning home. “This was may second year doing it. It’s a great feeling, you put a lot of work into it.”

Gillespie and Guerrero argued their case three times on the first day of competition at the University of Chicago April 24 and were feeling confident going into the final day.

They narrowly lost on points in the Sweet 16 round to a team from Saginaw Valley State University in Michigan.

“Losing in that first round, that was our biggest surprise,” Guerrero said. “We thought we did enough to make it to the next round. Unfortunately we didn’t but the other team was very strong as well.”

The long road to Chicago started for Gillespie and Guerrero with six of their schoolmates last fall.

Moot Court is made up of two-member teams arguing Constitutional issues in front of a panel of judges.

This year’s court had two issues to argue. Teams argued the 14th amendment issue of due process over a fictitious state law restricting a woman’s ability to get an abortion; and a first amendment free speech issue over a fictional state law requiring doctors read a scripted lecture to patients before performing abortions.

Students got the premises in September and had to study about 17 legal cases to support their arguments both pro and con.

They read three cases during 90-minute meetings three times a week, then formulated arguments and practiced their presentations.

Students studied the 17 legal cases looking for precedents that could help or hurt their arguments then built their cases.

“That’s the art of this,” Chwaliszewski said.

By mid-October the teams began meeting four times a week, practicing their formal arguments in front of volunteer alumni judges who offered critiques and suggestions.

The alumni are all attorneys with practices in various fields such as criminal, litigation, corporate law.

The moot court debate team appeared at a regional competition held at Fitchburg State University in November where Gillespie and Guerrero earned the invitation to the national tournament.

A second team of Nick Santosuosso ’16 and Joe LaTorre ’15 declined an invitation to compete so they could devote their time to preparing for finals.

They both plan to attend law school.

The preparation they received from Chwaliszewski and the alumni was key to their wild success.

“Throughout the year we had alumni come in and they asked us questions from left field to right,” Guerrero said. “They asked us broad questions and a lot of them we heard in the competition so we were very well prepared.”

The experience was worth every minute of work he put into it, Gillespie said.

“It’s one of the most rewarding things I’ve done in school, actually,” he said. “Put in months of work for one competition.”

The association has already released the premise of next year’s case and Gillespie has started reviewing the details.

Merrimack did have two teams qualify a year ago for the national tournament, including Gillespie and Guerrero.