A 30-member-strong pilgrimage from the Merrimack community is in Italy, following in the footsteps of St. Augustine and learning about his life and work. 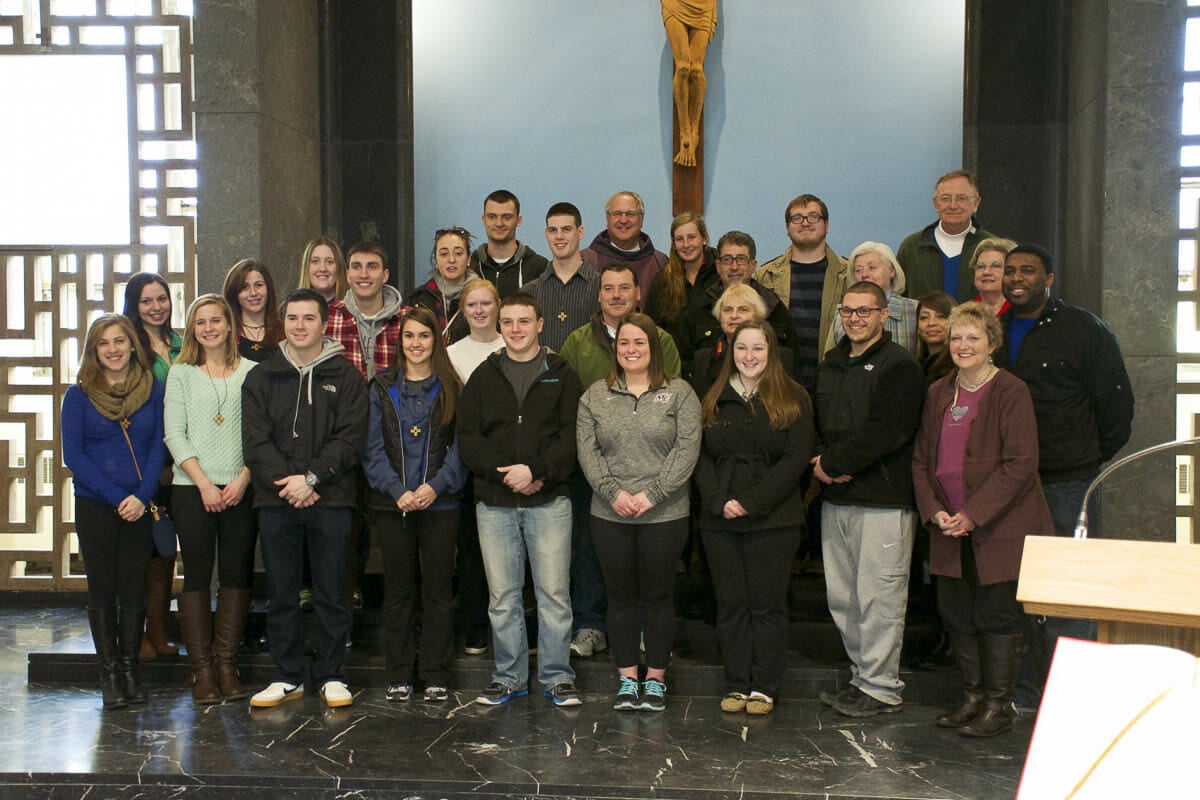 The group, which includes 19 students, set out on the first leg of the journey Thursday evening after Mass at Our Mother of Good Counsel Chapel in Austin Hall. During the Mass each pilgrim received Merrimack’s traditional wooden Augustinian cross.

“The whole point of Pellegrinaggio is to follow the footsteps of Augustine and discover the origins of the order of St. Augustine,” Dlugos said before Mass.

Kelley flew to Italy a few days early to ensure all arrangements, such as a bus, were in place when the group arrived in Milan.

Katie Brooks ’17, of Dracut, Mass., a human development major, said the trip is an exciting adventure but she was looking forward to the spiritual experience.

“I’m going because my lifelong dream is to go to Italy … I also want to learn more about St. Augustine,” she said.

A pilgrimage is a spiritual trip, so it should be more of a retreat than a vacation, Dlugos said. The travelers are visiting sites that were important in St. Augustine’s life and spiritual journey.

The Rev. Jim Wenzel, OSA, began Pellegrinaggio — Italian for “pilgrimage” — to teach faculty about St. Augustine and the Augustinian Order, said Kelley. After several years it was opened to students, alumni and school supporters. The trip is now part of the four-credit course “Journey in Search of Augustine” that Kelley teaches.

Woven into the pilgrimage is sense of community that grows among travelers who live together and share experiences, Kelley said.

Mike Mello ’16, of Auburn, Mass., a marketing and management major, decided to take the course and pilgrimage when a friend told him it would teach him things about himself that he didn’t know.

“That got me intrigued for a whole new experience,” he said.

Even before leaving, the class had helped him make friends he’d have never met without the course, he said.

After a layover in Munich the pilgrims flew to Milan, then traveled to a village outside the city for two nights. It’s believed the village Cassago Brianzo is where Augustine spent a few months after his conversion, preparing for his baptism.

The next stop on the itinerary was Milan’s St. Mary of the Nativity Cathedral, where the baptistery in which Augustine was baptized was unearthed several years ago.

The pilgrims then visited Pavia, Italy and St. Augustine’s tomb. St. Augustine died in North Africa but his body was moved a couple of times before being entombed in Pavia.

They were scheduled to rest Monday then travel Tuesday to the Tuscan countryside where the Augustinian order was formed in the 1300s, to learn where and how the original friars lived. The trip will include a stop at the Monastery of the Holy Saviour at Lecceto, in Tuscany, which is home to a group of Augustinian contemplative nuns.

The group travels to Rome on Wednesday and have a free day to explore the city Thursday traveling to the coastal city Ostia on Friday.

“We know when St. Augustine left Italy to return to Africa he spent time in Ostia waiting for a boat,” Dlugos said. “That’s where his mother (Monica) died.”

The pilgrims are scheduled to return March 14.