Civil engineering faculty and students from Merrimack College are working in Nepal over the next few weeks to replace a bridge destroyed in a 2015 earthquake that killed about 8,000 people. 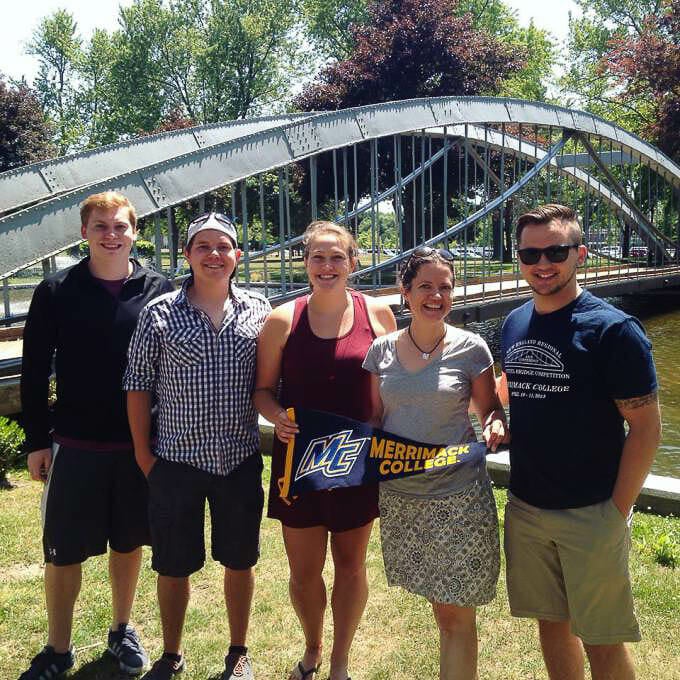 They will be posting blogs of their adventure on the Internet at http://merrimackcollegenepal.blogspot.com.

Professor Marc Veletzos and assistant professor Cynthia Carlson are working with civil engineering majors Leyna Tobey ’17, of Augusta, Maine; Brad Picard ’17, of Spencer, Mass.; Peter Foltz ’18, of Westfield, N.J.; and Sean Krause ’16, of Boston, who graduated this spring. Carlson and the students flew out July 25 to meet Veletzos who was already in Nepal and will return home August 15, 2016. Veletzos will remain in Nepal on sabbatical to teach a graduate course on structural engineering for Kathmandu University during the fall semester.

“Sending faculty and students are central to our mission at the college, and part of our responsibility as engineering leaders”, said Dean Allan Weatherwax.

It’s an uncommon and results-oriented trip that’s being taken seriously, Picard said by email. He enjoys learning about other cultures but trips like this one also help him appreciate the comforts of home and Merrimack.

“Being able to use what I know to make people’s lives easier and more efficient is why I wanted to get into engineering in the first place,” he wrote. “These trips are also full of surprises, so the immediate problem solving and challenges are always fun when we encounter them.”

The pedestrian and livestock bridge for which the Merrimack team will be surveying will be built of wood and rope over a river swollen by the monsoon season. They took Philadelphia rods and auto level devices, which are fairly low-tech but easy to carry in the mountain ranges. The team won’t be involved in the actual replacement of the bridge.

Veletzos visited Nepal as part of the partnership between the Thame Sherpa Heritage Fund and the ETH Zurich university in Switzerland after the earthquake last year. He’s using the personal contacts he developed then as resources to coordinate the student trip.

The trip will be an educational experience but also a life lesson.

“I think the educational value is a big part of this; not just the technical aspect but, really, from a social and professional perspective, learning about the different communities of the world and how they live,” Veletzos said. “To me, it’s an understanding how similar everybody is, how similar we are to each other. In my experience, the more people I’ve met from different cultures, the more I realize we’re the same and I hope the students get to see that, too.”

The team will be at the bridge site roughly 10 days but to get there they must fly to Kathmandu and then hope the notoriously poor weather is clear so they can fly to Lukla and then hike about three days to the village of Hilajung, Carlson said.

“A lot of travel up and travel back depends on the weather,” Carlson said before leaving. “It’s monsoon season so it might take us longer or we might get lucky and get to the site earlier.”

The flight into Lukla may be the hardest part of the journey for Tobey. The airport runway features a sheer cliff at one end.

“On the bright side, I am confident that if we survive the landing and takeoff, we’re pretty much invincible and can survive anything else Nepal throws at us,” she wrote in her first blog entry.

The team spent the spring training individually and took a team-building hike together up Mount Monadnock in New Hampshire. Carlson is an experienced hiker and has been working out in the gym but the team is going up to 12,000 feet, which is twice the height of Mount Washington in New Hampshire, so she’s expecting a challenge. In comparison, Tobey’s hometown of Augusta, Maine is 68 feet above sea level and North Andover, Mass. is 75 feet above sea level.

The opportunity to travel to exotic Nepal then study and survey a bridge for people in need is too good a chance to pass up, Krause said. He graduated in the spring and has a job with VHB Inc. of Watertown but is taking a break from work so he can go the Nepal.

“When I return to the states, I have been asked by my employer, VHB, to present my trip to the office as a Lunch-and-Learn, as a possible kick-start to similar service opportunities through the company in the future,” Krause said by email.

The excitement of the journey eclipsed any sense of apprehension of traveling so far from home, Foltz said. “Glad I could make a journey half way across the world with an awesome group to do some great work,” he said by email after reaching Nepal.

Veletzos is hoping his research at the bridge and during his sabbatical leads to new techniques for building earthquake-resistant buildings in developing countries using existing materials cost effectively.