Mary Lavallee '20, a health science major from South Hadley, Mass., was honored by the Andover Fire Department for her heroic role in helping save the life of a 28-year-old woman who collapsed while working out at the Merrimack Valley YMCA March 15. 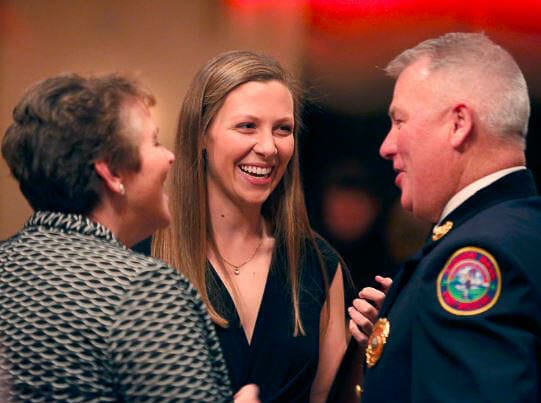 The first aid that Lavallee and three others provided the woman was critical to her survival, said Fire Chief Michael Mansfield before the awards ceremony.

“It’s not often that people want to get involved, and when they do there are much better survival rates, which means better positive outcomes in the end,” Mansfield said.

Lavallee and the others revived the woman with just a minute to spare.

It was an unusual night at the Y. Lavallee doesn’t normally work Friday, and her boss Dan Burke is usually gone by 5 p.m., but both were there when another lifeguard called for help over a walkie-talkie. A 28-year-old woman — a veteran of six marathons — was working out on a treadmill and collapsed.

Burke bolted for the area of the exercise equipment with Lavallee close behind. Burke already had an automatic external defibrillator (AED) and heard it announce the victim had no pulse. A dentist working out at the gym started chest compressions and Mary used a CPR mask to begin resuscitation while Burke hooked up the AED.

“When the AED is connected to the victim you have to stop everything so it can fully read the body to determine if she needs a shock,” Lavallee said.

After the two shocks to the victim’s heart, Burke and the dentist continued compressions and resuscitation breaths just before Andover Fire Department EMTs arrived and managed to revive the victim, who was taken to a hospital.

The woman was without air for six minutes. Brain damage starts after seven minutes, Lavallee said.

“It was a very very close call, but we all got very lucky,” she said. “We’re lucky Dan was still there because he’s prepared for these situations; I was just in the right place at the right time.”

Lavallee has been certified in CPR for three years but that was the first time she’d used it in an emergency.

Lavallee was presented a Certificate of Appreciation during the department’s annual awards dinner, March 30 at the Andover Country Club.

As important as her willingness to jump in to save the victim was, her training was as important.

“It’s great to have people trained, to be able to intervene in a medical emergency such as the one that occured at the Y, and initiate medical care immediately after the medical event and then have those people who are trained transfer care to first responders,” Mansfield said.