Merrimack College professor Joanne Gurry runs a series of leadership think tanks throughout the school year for educational leaders from the region that is meant to reinvigorate their minds and enthusiasm for their profession. 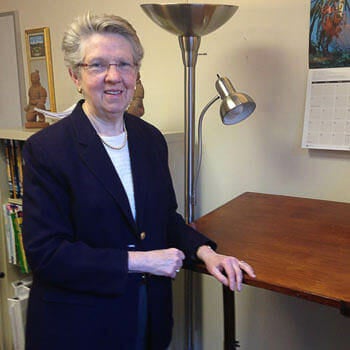 There are separate think tanks for the elementary, middle and high school levels that meet six times a year.

“The original idea was to create a stronger partnership, stronger network and try to give back to the communities,” said School of Education & Social Policy Dean Dan Butin. “They offer our students a huge amount of support as we send them there for student teaching; they guest lecture for us; teach for us, and this was a way to create reciprocity.”

The think tanks are departures from most in-school professional development days for teachers and, said Gurry, an assistant professor in the Graduate Education Department. They offer discourse, collegial sharing, and intellectual challenges.

“We look at various streams of thought that help us think of leadership in creative and innovative ways,” she said. “This shines a flashlight on how to look at it differently.”

The think tanks address issues as they enter the literature of leadership. One think tank session studied a book written by Harvard Business School’s Ethan Bernstein about the effective leadership needed to make problem-solving teams better.

Another think tank session took a turn at “generational churn” examining differences in styles when Gen X and Y, and even Millennials, start to take the mantle of middle management leadership from Baby Boomers. The younger generations of leaders have different leadership styles, than the boomers, Gurry said.

During February’s think tank for elementary school leaders, the group studied the question asking what subjects are worth learning in the 21st century and relied on a book by Harvard University’s David Perkins for talking points.

“He really did give us really good insights,” Gurry said. “I wouldn’t say answers, but insights.”

Gurry recently ended a series on mindfulness meditation for all three levels of think tanks.

“We don’t usually do all three levels but it was of interest to all levels,” Gurry said.

Mindfulness meditation is widespread, including use by the military and businesses.

It’s a practice of quieting the mind in a non-judgmental way so practitioners are less reactive and less defensive as they come to understand their habitual responses to challenges, Gurry said.

“This practice over the years does quiet the brain, gives it a respite,” Gurry said. “There’s some scientific evidence.”

The feedback from leaders in the scholastic community has been great over the last several years, Butin said. The think tanks offer a place where they can get out of the day-to-day routine to dig into deep issues they often have a chance to address.

“This is a wonderful opportunity the college gives,” he said. “It’s linking theory and practice.”