The Rev. Alejandro Moral Antón O.S.A., Augustinian of Note, participated in a conversation with Austin Scholars at the Rogers Center for the Arts. 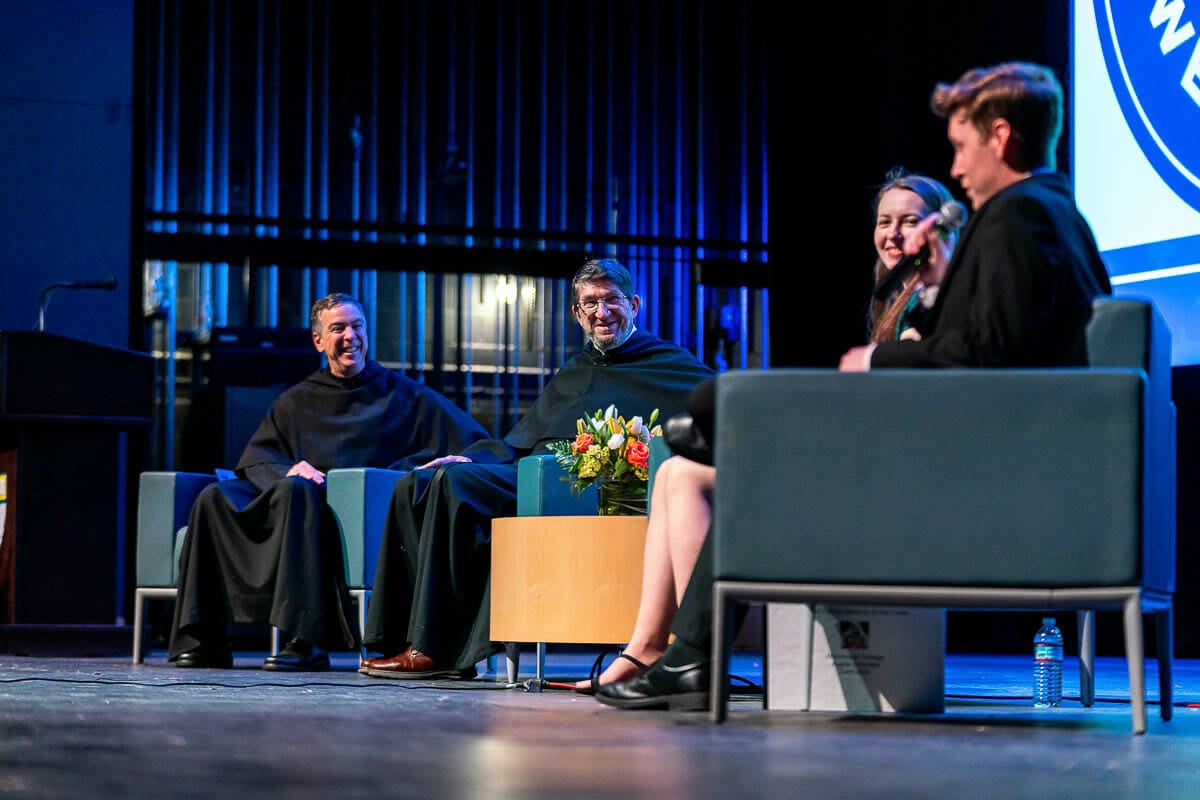 In a period of growing polarization around the world, it is necessary to first understand yourself before reaching out to others, the Rev. Alejandro Moral Antón O.S.A., prior general of the Order of St. Augustine, told Merrimack students recently.

“It’s a journey on a long road but the first step is finding out what about myself to know what I need to know,” Fr. Moral said. “It takes self understanding first. That then leads to creating relationships that are less polarized and with more communion in friendship.”

Fr. Moral shared this wisdom, as well as his thoughts on spirituality and his experiences as an Augustinian, during Merrimack’s Augustinian of Note lecture on March 28. He has served as prior general, the head of the order, since 2013.

He participated in a conversation at the Rogers Center for the Arts with Austin Scholars Theresa MacDonald ’22 and Michael Senoff ’22. They were joined on stage by the Rev. Joseph L. Farrell, O.S.A., vicar general of the Order of St. Augustine and former director of campus ministry at Merrimack College, who served as translator.

“I am very happy to see so many young people here,” Fr. Moral said. “When I see young people I think of the word dream. You all look to the future and have the opportunity to dream.”

The wide-ranging discussion between the students and Fr. Moral included what inspiring person gives him hope. He explained that Pope Francis continues to inspire him to carry on with his work, but added that the Democratic Republic of Congo is a place that inspires him as well.

“The people there, with all the needs they have still give witness to a joyful life,” Fr. Moral said.

The students also asked Fr. Moral how he personally would define spirituality, which he said is incredibly internal.

“It touches the core of my being,” he explained. “Spirituality is based on God and it helps me to live my life. It is that interior relationship that helps me live my life and serve the brothers and sisters I meet.”

The evening concluded with MacDonald and Senoff presenting Fr. Moral with a copy of the Austin Scholar’s Stations of the Cross Project, which features drawings and reflections by students that interpret the Stations as a way to address issues of social justice. Additionally, Merrimack College President Christopher E. Hopey, Ph.D., presented Fr. Moral with an honorary degree for his years of service.

The Augustinian of Note speaker series aims to introduce the Merrimack community to the reach of the Order of St. Augustine, while showcasing to Augustinian leaders how the order’s mission and values are being lived out by Merrimack students.

Swapping for Sustainability: Merrimack Students’ Clothes Get a Second Life