To mark the 50th anniversary of Trappist monk Thomas Merton's death Dec. 10, 1968, the Center for the Study of Jewish-Christian-Muslim Relations held an all-day conference Oct. 16 on his life and work, focusing on his interfaith writings and relations. 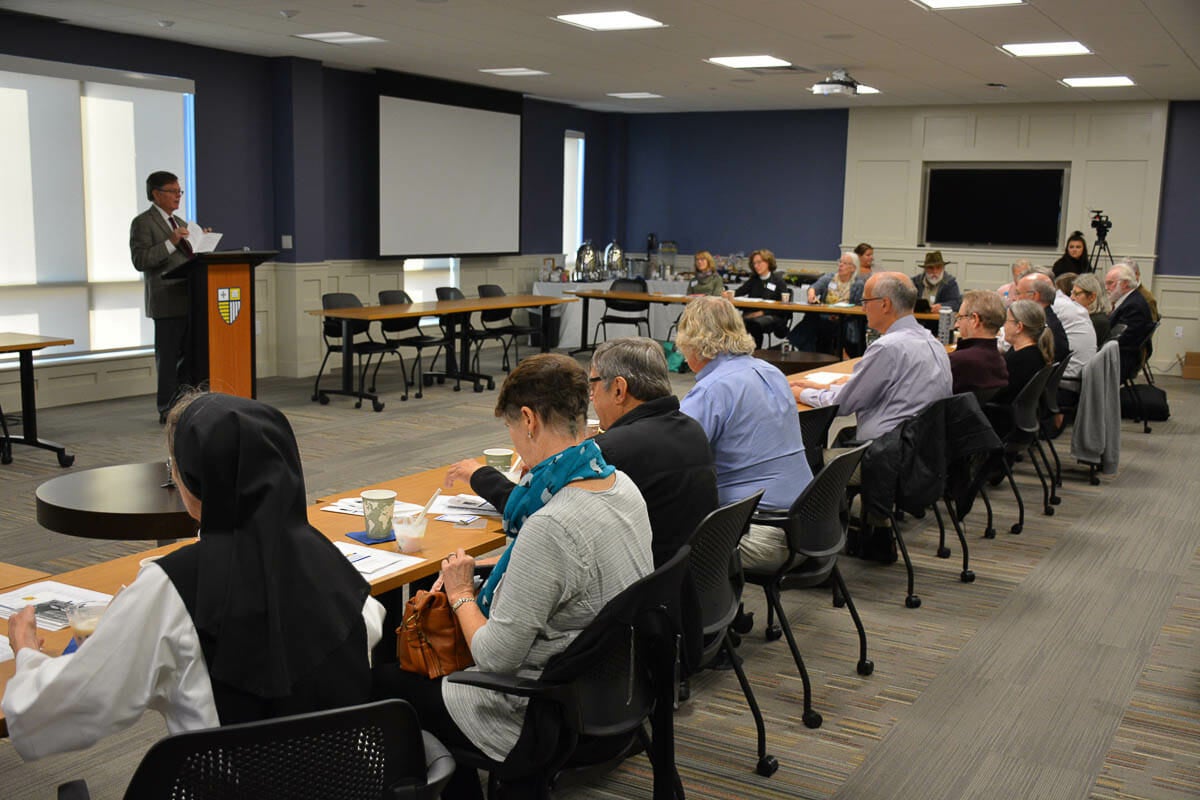 Merton, a graduate of Columbia University, was a convert to Catholicism who joined the Trappist Monastery of Gethsemani in rural Kentucky. Out of his life as a cloistered contemplative, including a number of years spent living as a hermit, Merton became a prolific writer, an inquisitive theologian with keen interest in the mystical traditions of other faiths, a social activist opposing the Vietnam War, and a Catholic pioneer in inter-religious dialogue.

The conference brought together leading experts on Merton from religious and academic communities as far away as Pennsylvania.

Professor Joseph Kelley, the center’s director, said many members of the International Thomas Merton Society were among the more than 40 participants in the day-long conference. “We intend to publish the proceedings in a monograph, and will be in conversations with the ITMS about their interest in the papers and and responses presented today,” he said.

The conference was a way of living out the center’s mission to draw from the wisdom of religious traditions and educate for religious literacy while nurturing spirituality and caring for one another and the Earth, said the center’s Assistant Director Deb Longabaugh-Burg.

Kelley and Longbauagh-Burg described the conference as a rich gathering with people from various backgrounds and across generations who share a meaningful practice of — or curiosity about — leading contemplative lives. Many attendees said they felt welcomed and cared-for throughout the day, and were grateful to find an oasis with like-minded souls in the midst of the chaos and busyness of their lives, Kelley said.

Speakers included Edward Kaplan, a professor emeritus at Brandeis University who presented a paper on Merton and Judaism, with a response from Emma Polyakov, assistant professor in Merrimack’s Religious and Theological Studies Department; Padraic O’Hare, professor emeritus at Merrimack College addressed Merton’s outreach to other Christian denominations, and his role in “democratizing spirituality;” the Rev. Martha L. Hubbard, regional canon for the Northern and Western Region of the Episcopal Diocese of Massachusetts, responded to O’Hare’s paper; author Patrick O’Connell, a professor of theology and English at Gannon University in Erie, PA, addressed Merton’s poetic writings on Sufism; and Boston portrait artist and contemplative Mary Minifie gave her perspective on how her own journey led from Sufism to Orthodox Christianity.

Professor Christina Hardway, chair of Merrimack’s Psychology Department, facilitated a session on the practice of mindfulness meditation, which conference participants related to the deeper practice of contemplation.