Sunday, April 5, is Easter, but Saturday also marks the start of Passover for the Jewish faith. On Tuesday, Rabbi Robert Goldstein held the 18th annual model Seder for Merrimack College students to show them the roots of the Last Supper. 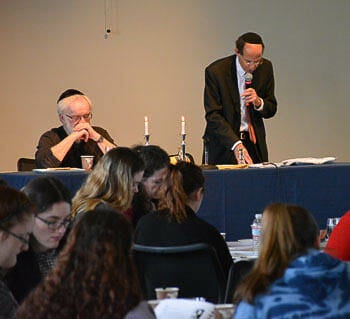 Goldstein, of Temple Emanuel in Andover, teaches Introduction to Judaism at Merrimack, and invited the classes for professors Padraic O’Hare and Joseph Kelly, director of the Center for Jewish-Christian-Muslim Relations, to join his class for the meal.

“It’s a Catholic college, but of course the roots of Christianity are important,” Goldstein said before the Seder began.

The Last Supper was a Passover Seder that is commemorated in the Eucharist at every Catholic Mass.

The model Seder included the traditional prayers and songs.

Goldstein explained the meanings of Seder foods that include matzah, bitter herbs, charoset, parsley, a shankbone, an egg, and an orange.

It may have been the most widely attended model Seder that Goldstein has held at Merrimack. About 140 students took part in the meal.

“It’s the best ever,” said Aldebran Longabaugh-Burg, the assistant director of the Center for Jewish-Christian-Muslim Relations.

Students who took part said they enjoyed the model Seder.

“I thought it was pretty interesting,” said Aaron Mack ’18 of Stoughton, Mass., who is majoring in business management. “Pretty different experience for people who are not Jewish.”

Megan McCarthy ’15, a human development and communications double major from Norwood, Mass., and Kimberly Roemer, ’15, a psychology and religious studies double major, agreed as they left that it was fun and had some surprises. They are both members of Goldstein’s class.

“Rabbi Goldstein is great. He makes everything fun,” Roemer said.

They didn’t realize there was so much Hebrew spoken during the scripted meal or that it is so child-oriented.

“I didn’t really know they sang so much,” McCarthy said.

Passover this year runs from April 4 to 11.