Michaela Keating has found at least a partial answer to a mystery that has intrigued the McQuade Library community for years: From where did the framed American flag on the third floor come? 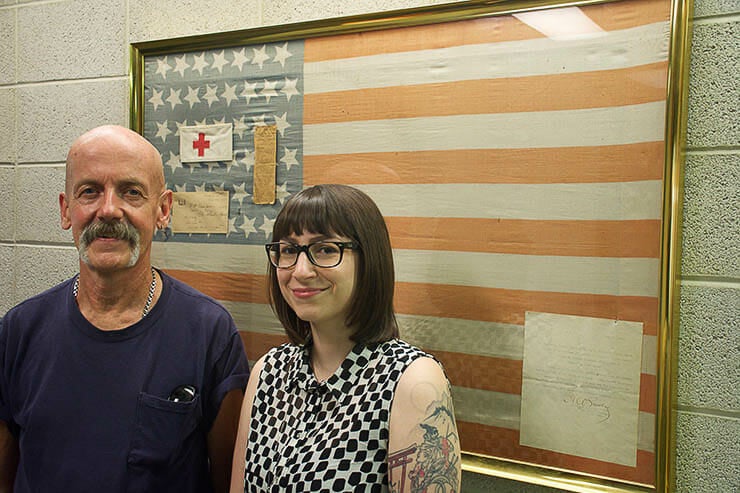 Keating, an instruction/liaison librarian at McQuade, said that on Aug. 9 she and Agneris “Aggie” Vazquez ’17, president of the Commuter Council, were looking for information on the history of the commuters population at Merrimack when she found a clue.

Keating and Vazquez were going through the boxes that had photo albums, diplomas from other schools and old paperwork. There was a file folder inside one of the boxes and Keating spotted a yellowed laminated news clip from the Eagle-Tribune newspaper dated Dec. 14, 1970 about the flag being presented to then-college president the Rev. John R. Aherne, OSA.

“She just by chance found it,” said Bob O’Brien, the operations manager for McQuade. “It’s like finding another needle in the haystack.”

Keating was thunderstruck when she opened the file with the news clip and two black and white photos.

“To have it there staring at me was a little shocking to me,” she said. Vazquez didn’t seem as impressed.

“I said to (Vazquez), ‘this is the flag’ and she said ‘what flag,’” Keating said. “I said, ‘this is it, this is the mystery everybody is talking about.’”

Anna Perkins was friends with the college’s legal counsel Col. Earl Brown and his wife Marian who was an executive board member of the Ladies of Merrimack.

Along with the flag, there’s an envelope with a July 18, 1898 date stamp from Santiago de Cuba in the frame; a Red Cross armband; another newspaper clipping; and a typewritten letter from the Army’s then-Brigadier General A.W. Greeley.

Greeley’s letter ordered that a woman named Mrs. John Addison Porter, who was performing hospital and relief work for the Army in June 1898, should be given access to a telegraph.

Porter apparently had some political clout. Her husband was secretary to President William McKinley.

The undated yellowed news clipping from a newspaper called the “Globe” – though it’s unclear if it’s the Boston Globe – refers to common knowledge that Porter and Clara Barton, founder of the American Red Cross, sailed aboard the ship Relief to Cuba when the war ended.

“It is not generally known, however, that when the ship entered the harbor in advance of the warships that Mrs. Porter stood on the deck and waved two small American flags, thus being the first woman to wave the American colors in Cuba Libre,” the Globe news story said.

The Globe clip reported that Porter, donated one of the flags to the Putnam (Conn.) Chapter of the D.A.R. but there wasn’t reference to the second flag which appeared lost to history.

Until now. Or maybe the flag in the McQuade is the Putnam flag. “I don’t know why it became a mystery for so long when the evidence of where it came from exactly was in a box,” Keating said.

The Globe news clip mentions Mrs. Edward Perkins, who was a member of the Colonial Dames, and her charitable work with the Daughters of the American Revolution in Putnam, Conn. at the time the flag was donated there. The relationship between Mrs. Perkins and the Perkins family isn’t clear, said McQuade Library Director Kathryn Geoffrion Scannell.

It’s still a mystery how Anna Perkins got the flag. A tantalizing tidbit in the December 1970 Eagle-Tribune story notes that Anna Perkins was a regent of the Boston chapter of the Daughters of the American Revolution.