With a snip of oversized scissors and a burst of applause, Merrimack President Christopher E. Hopey cut a ribbon to open the new Compass suite on the third floor of McQuade Library. The four-year-old program works with students believed to be at risk of struggling academically, starting in their first semester at Merrimack. 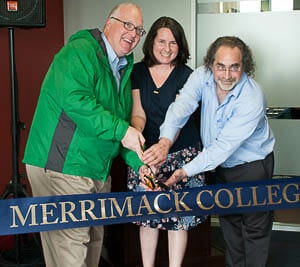 “Compass is central to what we do as an institution,” Hopey told the group of faculty, students and staff who gathered to christen the two-year-old program’s new quarters. “It is a moral imperative that we offer every student the help he or she needs to succeed.”

Compass works with students believed to be at risk of struggling academically, starting in their first semester at Merrimack. “The mission truly is to take underprepared students and, I know it sounds lofty, but change the direction of their lives,” said program manager Jennifer Evans before the ribbon-cutting.

Compass grew out of a suggestion from psychology Professor Michael Mascolo about how to help students succeed academically, Hopey said. That was followed by a series of conversations involving a broad array of Merrimack faculty.

Students who work hard, persevere and cultivate their sense of self can finish college with Compass’ help, Mascolo said.

He said the traditional collegiate method of letting students fail or succeed on their own is flawed. Athletic coaches who work closely with players to improve technique and conditioning would never coach the way teachers teach, he said.

Compass works with students on academics during their first year, then offers academic counseling and workshops throughout their college careers.

During the first years of Compass, students met in rooms around campus for classes and workshops, which created a fragmented learning approach, Mascolo said.

“What this (new space) does is centralize everything,” he said. “The kids come in and use this as a study area, a learning area, and we’re right here for them.”

The suite creates a home base where students can bond with each other and the programming, so they can define and organize their sentiments, Mascolo said. During a student’s first semester, Compass offers three Compass courses and a non-Compass course.

During second semester students take two Compass courses, including religion and psychology, as well as two courses in their majors. During the rest of students’ college careers, Compass offers workshops on topics such as time management, scheduling, and math.

Compass helps students develop a sense of self-worth — morally and academically, Mascolo said. It includes development of self-motivation so students continue to work even outside the classroom

“If you persevere you can’t not learn, and that’s what we try to show them,” Mascolo said.

The college initially made participation voluntary for identified students, who were invited rather than required to participate when Compass began in 2012. The grade point averages for students who accepted the invitations are higher than those who declined; the rate of retention is higher; and the number of students on academic probation is lower, Mascolo said.

“There’s clear evidence it is working,” he said. “What is working is heavy support, developing relationships and high expectations.”

About 160 students have gone through the program including this year’s freshmen.