The onset of ALS came with the simple cramping of Doug McIlvaine's left ring and middle fingers almost three years ago. 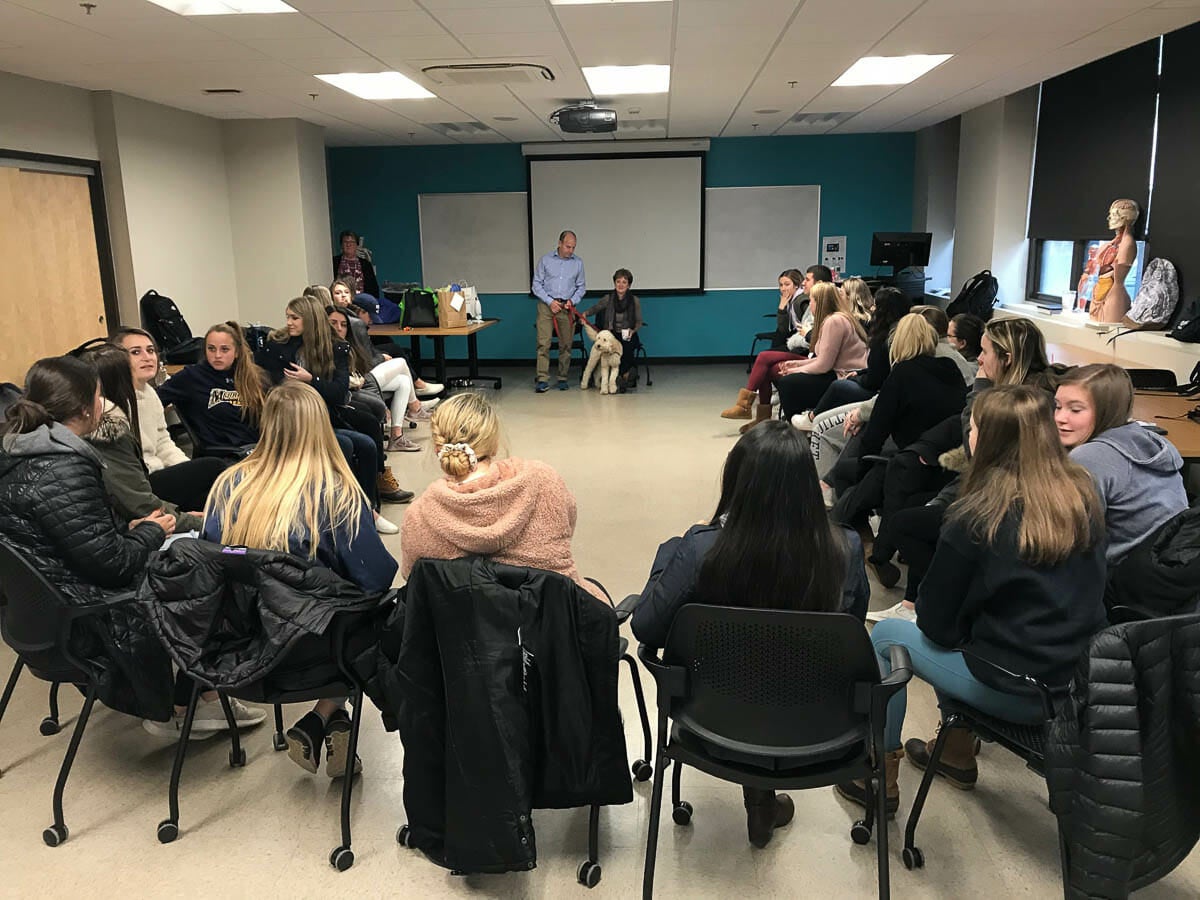 “I have such respect and admiration for Doug’s desire to get his story out and make a difference,” Ierardi said.

Ierardi’s students were so moved by the McIlvaines that they are volunteering to help the family in whatever ways they can. Merrimack’s Nursing Club recently received recognition from the Student Government Association and will help with any needs the family has, such as dog-sitting or fundraising, Ierardi said.

“Doug and Dolly both gave my students valuable insights into professional communications with a patient,” Ierardi said. “They did some teaching, actually, about clinical trials and I think they touched on their strengths and spiritual faith life and how that holds them up. I think the students are just very grateful.”

When McIlvaine got to the point where he couldn’t lift his left arm, doctors still didn’t think it was anything more serious than a side effect from surgery to replace three discs in his neck and prescribed hand rehabilitation exercises.

McIlvaine said that after more than six months without improvement to his arm following the neck surgery, McIlvaine’s doctor performed more surgery to clear out spinal stenosis which was suspected of pinching nerves. When that didn’t work, doctors considered a nerve transplant at the Mayo Clinic in Minnesota.

After many more doctors appointments and consultations with specialists, McIlvaine’s original neurologist told him, “I can’t tell you you don’t have ALS.”

“I felt like the air was sucked out of the entire room,” Dolly McIlvaine said.

McIlvaine didn’t believe it and asked Dolly not to tell anyone. So she suffered in silence.

“I would burst into tears and nobody knew why,” she said.

Another doctor suggested the cause of McIlvaine’s problem could be the nerve disorder multifocal motor neuropathy (MMN) which mimics ALS. There were also diagnoses of possible blood disease, collapsed diaphragm and heart disease.

Within a few months, the athletic McIlvaine who still played hockey as he approached 60 years old, was getting winded just by walking to the car.

A pulmonologist at Lahey Clinic suggested the McIlvaines visit Massachusetts General Hospital for a diagnosis. After waiting a few months for an appointment, a neurologist there sent blood work to a laboratory in St. Louis which ruled out MMN – leaving ALS as the only remaining diagnosis.

It was heartbreaking telling their 13-year-old son, and two grown children who live in Pennsylvania and California, about the diagnosis. Thankfully, testing has shown that McIlvaine does not have the hereditary version of ALS, meaning his children are not at an increased risk of contracting the disease.

McIlvaine is diagnosed with slow-progressing ALS but that could change because doctors don’t know what triggers the disease. He’s already left his job as a database administrator for Fidelity Investments in Merrimack, New Hampshire. The couple has a circle of friends who help them do everything from the mundane changing of lightbulbs in the ceiling and raking leaves to the more heroic dog-sitting.

One of the problems the McIlvaines have encountered is understanding the medical language doctors and nurses use when talking about ALS.

“As medical professionals, you speak a different language. As a patient, we may nod our heads but we have no idea what you’re saying,” Dolly McIlvaine told the aspiring nurses.

McIlvaine refuses to let the ALS diagnosis define him as a person. Now that news of his ailment is public, he tells friends not to ask about his health so they can discuss everyday topics instead. He and Dolly are traveling more to places such as Iceland and western states.

“When I first got the diagnosis, it was a kick in the teeth,” McIlvaine said. “I was down and I cried a lot but after a couple of weeks I decided it wasn’t a productive way of life and decided to do fundraising.”

Together the couple has already raised tens of thousands of dollars. Their son Charlie came up with the idea of a “pet parade” fundraiser. Participants dress up their pet in a costume and then post a video online challenging three friends to dress up their pets with the hashtag #ALSPetParade. It’s similar to the ALS Ice Bucket Challenge popularized by Pete Frates who died earlier this month from the disease.

The McIlvaines have raised nearly $70,000 for three organizations, including Compassionate Care ALS, of West Falmouth, Massachusetts; The ALS Association, headquartered in Washington, D.C.; and the Healey Center for ALS at Massachusetts General Hospital.