Merrimack College assistant professor of health sciences Michael Corcoran is the lead author on a 5,500-word article, accepted by the prestigious Journal of Nutrition, Health & Aging, studying the effects of exercise on people at least 65 years old, that shows even small amounts of exercise are beneficial when they can't do the recommended 150 minutes a week. 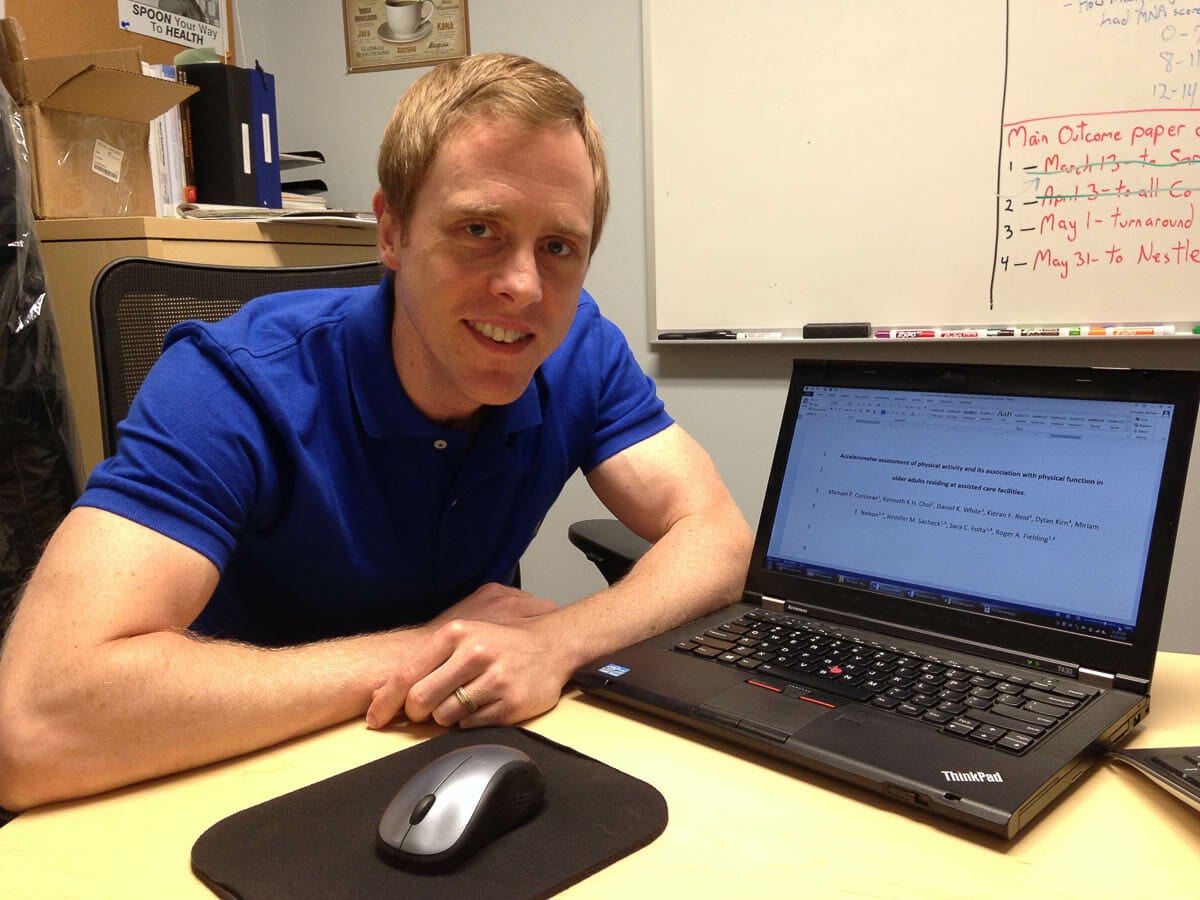 “The idea is we need to develop tailored exercise for this population,” Corcoran said from his office in the Merrimack Athletic Complex. “What we found is it’s worth it.”

The study looks at the relationship between physical ability and function, taking into consideration whether the participants use aids such as canes, walkers or wheelchairs.

The nationally accepted recommendation is that adults get at least 150 minutes of moderate exercise or 75 minutes of vigorous exercise weekly, as well as strength training two or more times a week. However, it is difficult for some older people to get the full 150 minutes due to mobility problems, health problems, and a variety of other reasons.

Corcoran and eight co-authors looked at whether elderly people living in senior living communities would benefit from as little as 25 minutes of exercise a week.

The most active participants in Corcoran’s study exercised just 25 minutes weekly but had significantly better health than those doing less than five minutes weekly.

“We found that there’s a very big, clinically meaningful difference in their physical ability. They moved better, they were less likely to use an assistive device, they were much stronger, and generally, just much healthier overall,” Corcoran said. “More than you’d expect from an extra 20 minutes a week.”

People tend to over-estimate how much exercise they get so the study used accelerometers to measure each person’s physical activity and how rigorous that activity was.

The study divided participants into quartiles of activity from least active to most active and compared physical function between the four groups. The accelerometers showed even the most active members of the study group were well below the recommended level of exercise.

The study used several powerful tests to measure mobility, such as the 400-meter walk test.

“These are very predictive of mortality,” Corcoran said.

Four hundred meters is only three or four city blocks, or once around a typical athletic track. In unrelated studies older adults who take six or seven minutes to complete the test have a 40 percent chance of surviving the next six years.

Participants in Corcoran’s study took nearly 10 minutes and about half couldn’t even finish the walk.

The study also used the short physical performance battery (SPPB) to test such physical ability as balance, leg strength and walking speed. Twelve is a perfect score and national studies have shown a half point improvement through exercise affects all areas of health.

Corcoran’s study showed participants who engage in 25 minutes of physical activity a week have a whopping 4-point greater SPPB score than those doing just five minutes a week.

“This was huge,” Corcoran said. “The take home message for these facilities and nursing homes is try to target 25 minutes which may be more realistic than 150 minutes,” Corcoran said.

This is the second of three papers being written in a much larger study, Corcoran said. He’s the lead author on all three.

It focused on recruitment for the study which, particularly in geriatrics, is always the most difficult part.

Corcoran and his co-authors screened about 460 people in 80-90 assisted living facilities before settling on the 65.

Corcoran is now working on the final paper covering the study’s findings, which compared a 6-month exercise-nutritional supplement program with a lifestyle education control.

The co-authors are reviewing and editing the manuscript before it’s submitted to an academic journal for review and further editing.

Corcoran earned his undergraduate degree from St. Bonaventure College then worked as a teaching assistant at Seton Hall University before earning a doctorate at Tufts University in cellular and molecular nutrition while working as a research associate.