Over $500K raised for Pan Mass Challenge by ’88 alumnus

Mike Maher '88 and his bicycling team have raised over $500,000 for the Pan Mass Challenge benefiting the Dana-Farber Cancer Institute since 2004 and even though this year's ride is over he's accepting donations through the end of September. 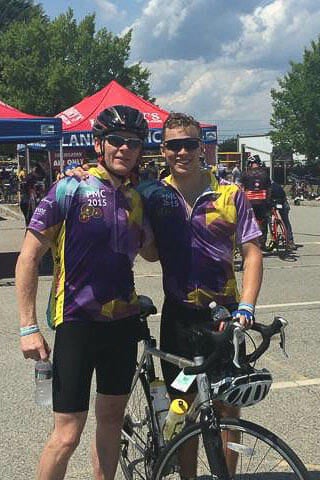 “Once you do it once, you’re hooked,” Maher said of the ride. “It’s really inspiring.”

Maher started riding in memory of his wife Jen who died from a rare nasal pharyngeal neck and back cancer in 2007 after a three-year battle.

Jen was an athlete who ran road races as well as bicycled. She started riding the Pan Mass Challenge in 2000 to benefit research for a cure to neuroblastoma cancer, long before she was diagnosed with her own.

“It was incredibly shocking that Jen got sick,” Maher’s sister Maureen Maher said.

“I mainly do it for the cause,” he said. “It keeps our family and friends attached to Jen’s spirit. It meant a lot to her and it’s a great cause.”

The bike ride is a family affair. Maher, joined this year by his son Connor, 20, and his daughter Meghan, 17, plans to ride next year. His son Michael, 23, has back problems and works on the all-important support crew.

“I’ve grown to appreciate it a lot more as far as the sport itself and doing it and what it takes to train for it,” Maher said. “And certainly to have my son riding has gotten me a lot more into it and focused to make sure he trains properly and has the right equipment.”

Maher has gone through three bicycles since he started. Somebody on Team JenStrong rides Jen’s bike every year.

He used to kick off his training program on Father’s Day with a ride past the cemetery in which Jen is buried but as he gets older Maher learned he needs a longer regimen and tries to start in mid-May. This year’s training started much later because of the snow.

To donate to Team JenStrong go to www.pmc.org and type in the team’s name or Michael Maher’s name.