Panelists for a symposium on Freedom of Speech, Religion, and the Press that met March 25 as part of Merrimack College's Social Justice Week agreed terrorism against the media can't be justified socially or religiously, even when newspaper stories or cartoons are offensive. 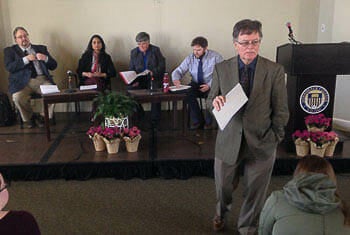 Terrorism in the name of the Prophet Muhammad is a misinterpretation of Islam and should be condemned, said panelist Shua Arshad, president of the Groton Interfaith Council.

“Let us work on our hearts,” Arshad said. “The good people outnumber the bad, but the bad flourish when the good do nothing.”

The symposium was scheduled for Feb. 9 in response to the Jan. 7 terrorist attack on French satirical newspaper Charlie Hebdo, in which 12 people were murdered but a snowstorm forced postponement. It seemed appropriate to reschedule it for Social Justice Week, said organizer Joseph Kelley, the director of Merrimack’s Center for the Study of Jewish-Christian-Muslim Relations.

Brothers Cherif and Said Kouachi reportedly attacked the weekly newspaper in retaliation for its satirical depictions of Muhammad. All depictions of Muhammad are prohibited under many interpretations of Islamic law. The brothers killed 11 people and wounded 11 others, and more were killed and injured in subsequent incidents as police closed in on them.

Society needs to examine the causes behind terrorism, Arshad said.

Often there may be socioeconomic reasons that lead to radicalization of Muslims, said Kelley, who recently spent time meeting with Muslim youth in France. “I know there’s a lot of tension and it has to do with economics,” he said.

There are Western countries in which a Muslim can earn a master’s degree and still not find a job, which leaves them open to radicalization, Kelley said.

The Charlie Hebdo shootings were wrong, but being Muslim is not wrong, Arshad said. The Koran is an enlightened document that allows freedoms and rights, she said.

Muhammad himself was known for turning the other cheek, she said. “I don’t think they (terrorists) have any clue who the Prophet Muhammad was, in my opinion,” Arshad said.

Johnson said he considers much of Charlie Hebdo’s work juvenile, but supports its right to publish what it wants and called it undeserving of physical attacks. The Eagle-Tribune published an editorial a day after the January shootings condemning the attackers for their savagery and barbarism.

“I will defend to the death the right to publish it,” Johnson said.

Both Charlie Hebdo and its predecessor have run afoul of opponents before, Johnson explained. The predecessor publication was shut by the French government after it mocked Charles de Gaulle’s death. Charlie Hebdo was firebombed after it spoofed Muhammad in 2011.

Charlie Hebdo satirizes all religions and politics, but appears to be tougher on the Muslim community lately, Arshad said.

Consumers always have the right to turn away from a media outlet with which they disagree without being violent, said Nick Pappalardo ’15, a marketing major with a minor in communications, from Hampton, N.H.

“I think there’s more responsibility on the consumer,” Pappalardo said.

Joe LaTorre ’15, secretary of the Interfaith Alliance, attended the symposium with Dan Yang ’15, a mass communications major from China, and asked whether terrorism such as the Charlie Hebdo attack is a reaction to religious intolerance in France. People aren’t permitted to wear symbols of religion such as hijab on the head or a crucifix necklace in public facilities such as schools, he noted.

That strict separation of religion and state does set up a conflict with the power of the state to run individuals’ lives, Johnson said. The United States has the First Amendment protecting freedom of speech and religion, he noted.

Fervor over the topic may have cooled in the two-plus months since the shootings but it is still an important subject, said Alisha Reppucci, who works in Merrimack’s Mission and Student Affairs Office. Her desk is in the Center for the Study of Jewish-Christian-Muslim Relations.

“I think it’s something we needed to talk about,” she said. “I enjoyed getting different perspectives.”

The symposium had a nice mix of experts on the discussion panel, said Deirdre Debruyn Rubio, a friend of Arshad who’s a doctoral student at Harvard University’s graduate school of arts and sciences working in the religion department.

“I thought it was great,” she said.