Teagan Mockus '19 was a non-scholarship recruit for Merrimack's women's lacrosse team four years ago, but rose to be captain. 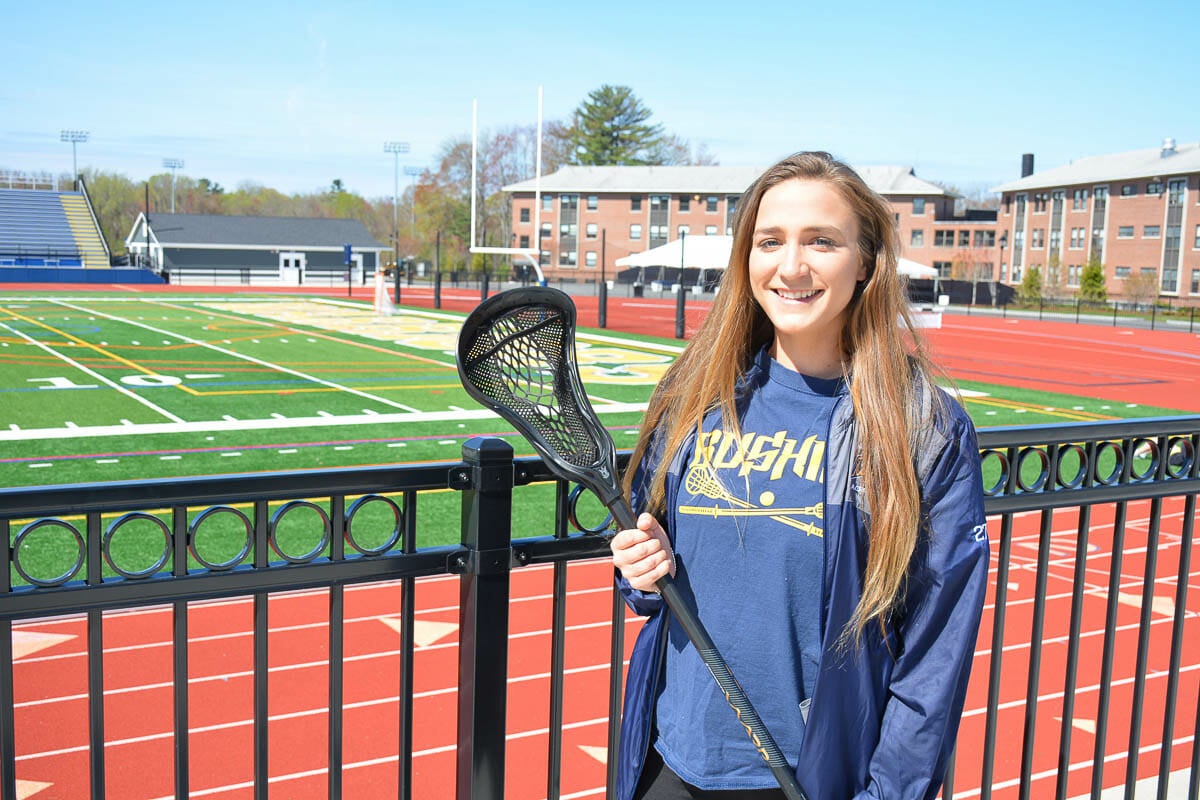 After capping her undergraduate career with an Northeast-10 conference crown, Mockus will help coach the Swiss women’s national team this summer under Merrimack head coach Julie Duffy, before attending graduate school in England where she will play for the school team – on a scholarship.

“I honestly wouldn’t expect it to happen if i didn’t come to school here,” Mockus said. “There’s no other way.”

Duffy is coaching the Swiss national team this summer to prepare it for two-week European Lacrosse Championships tournament in Netanya, Israel, and asked Mockus to join her staff as a coaching intern.

With only a week of training and a two-week tournament, Duffy needs extra help for her staff and offered internships to her entire Merrimack team. “To work with any of them in a capacity like this is a unique opportunity and I can’t wait to work with Teagan,” she said.

The tournament will introduce Mockus to the international lacrosse community and help her toward a career in coaching. The tournament is well run so coaches and players will be in controlled environments where they will be safe, Duffy said.

Mockus was a business administration major with a concentration in international business.

After the tournament, she will return home to Connecticut for a short stay before leaving for Durham University in northeast England in mid-September.

The lacrosse schedule in England only plays its games on Wednesdays and will require about half the 16 hours a week Mockus devoted during her years at Merrimack.

“I’m super excited,” she said. “I didn’t expect to get a scholarship but it worked out that way.”

As a defender, Mockus’ strengths are in running and communicating. As a defender she is sort of a traffic cop directing positioning of her teammates.

“I’ve been told by my siblings ever since I was born: I don’t shut up,” Mockus said with a laugh.

In Durham, she will earn a master’s degree in management, for which she shows the same fervor as she does for lacrosse. She hopes to incorporate her two passions in the business world some day, perhaps as a coach.

Mockus found her love for international business while taking part in the X-Culture global experiential learning competition under assistant professor of management Valerie Bell her sophomore year. She was teamed with students from Israel, Pakistan, Mexico and England who all communicated through computers and worked together despite different time zones and cultural differences.

“It’s just so cool because everything is so different,” Mockus said. “The different ways of life and how you have to integrate your business practices into that.”

Duffy was a successful and innovative coach even before joining Merrimack three years ago. The Northampton, Mass. native started her career as a graduate assistant at Ohio Wesleyan University and worked her way up to head coach at the school. She was then hired to start the lacrosse program at the Division 2 University of Findlay in northwest Ohio.

Duffy’s lacrosse program at Merrimack won the Northeast-10 Conference championship this spring and is immediately moving to NCAA division 1 Northeast Conference with the rest of the college next year but there is no fear in her team. Winning the NE10 shows the program is already among the best nationally at the division 2 level which makes the step to the next level a potentially small one. Going forward, she wants the team to be competitive in the postseason and grow its national reputation.

“Our goal for the next four years is to go in, be at the top and try to win championships,” Duffy said.

After five years at Findlay, Duffy was attracted to Merrimack by the growth in the college and the lacrosse program. The school’s growing reputation for academics and the recent campus expansions are recruiting gems.

“When recruits walk on campus they see construction, which is what they want to see,” Duffy said. “They want to see new and flashy. President Hopey has given us a great car to drive and show people what we are made of.”