Two Merrimack College alums returned to campus March 18 to share their experiences with undergraduates about the rigors they went through getting ready for medical school and to offer encouragement to others who want to follow them. Dave Daniels, 24, of Andover, and Petar Golijanin, 24, of Novi Sad, Serbia, were biochemistry majors who graduated in 2013. They've been best friends since their sophomore year of college. 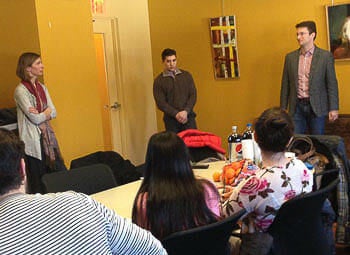 Golijanin is preparing to start his first year of Dartmouth College’s Geisel School of Medicine and Daniels will submit as many as 30 applications to medical schools June 1 with the hope of starting in the summer of 2016.

They each shared their grueling stories of endless hours of studying, working and writing to prepare for medical school but said it’s not an outlandish goal for Merrimack students willing to put in the preparatory work.

“That’s one of the questions you have to ask: Am I passionate about this,” Daniels said. “And if you are, you are going to do whatever you have to do.”

You don’t have to be the smartest student trying to get into medical school, you just have to outwork everybody else, Daniels said.

“Hard work, that’s what separates you from everybody else,” Daniels said. For them, the hard work started at Merrimack. Assistant professor Jimmy Franco in the Chemistry Department would unlock the doors of Mendel Hall on Saturdays so the students could study all day for the medical school entrance exam.

Assistant professor Charlotte Berkes, of the Biology Department, is the health profession advisor. She moderated Wednesday’s discussion with Franco, who mentored Daniels and Golijanian during their academic research program.

To get into medical school it’s important to have a strong grade point average in college and score well on the MCAT entrance exam but also have extracurricular activities, Berkes said.

“They show you have qualities that aren’t captured in raw numbers,” she said. It’s recommended that students take some time off graduating college and applying to medical school so they can prepare for the MCAT exam and gain life. Most medical school students are in their mid-20s when they matriculate, she said, citing the Association of American Medical Colleges’ website.

It’s not necessary to major in the sciences to get into medical school. Fifty two percent of humanities majors are accepted to medical school, even thought that’s largely because there are fewer applicants from that discipline and schools want to diversify their enrollments, Berkes said, citing a University of Maryland study.

“Medical schools don’t care what your major is,” Berkes said. “The important thing is your ability to be successful.”

Undergraduates do need to take medical school prerequisite, such as chemistry, biology and physics.

After graduating Merrimack, Daniels and Golijanin took research jobs to boost their resumes for their medical school applications.

Golijanin submitted about 70 applications for research jobs, including one to a gold mine in Arizona looking for a chemist, before getting a job as a research coordinator in sports medicine services at Massachusetts General Hospital in Boston. While he was working there he’s had articles published in the “American Journal of Sports Medicine” and “Journal of Shoulder and Elbow Surgery” which further improved his resume.

Daniels estimated he applied to 30-35 biotechnology companies, pharmaceutical companies and hospitals before landing a job as a research assistant in infectious diseases at Brigham and Women’s Hospital in Boston.

Research work helped the friends confirm they really want to be doctors. Working hard also earned them recommendations for school from their supervisors, Franco said.

“His boss vouched for him because he did a really good job,” Franco said. “They won’t vouch for you if you’re a train wreck.” Even though they were working hard at hospitals, Daniels and Golijanin continued to use their time after graduation preparing for the Medical College Admission Test. They each took at least 15 practice exams before the actual test. There are tutorial schools that can prepare students but Daniels and Golijanin bought on-line copies of Kaplan preparatory books.

Golijanin said he even worked on improving his nutrition and sleep habits for weeks before the test to optimize his intellectual acuity.

He applied to about 22 medical schools and was accepted to his first preference. Daniels plans to apply to about 30 schools.

Applicants should play-up the things that make them unique. Golijanin let his nationality work for him and said at Dartmouth there were five applicants who are former members of the military.

During the personal interviews it was important to show their true personalities and not tell the school official asking questions what they thought they wanted to hear, Golijanin said.

Potential questions ranged from asking what you would do if a bear chased you in the woods to the definition of social justice.

Daniels said he has a friend at Tufts University who played hockey at Colgate University and majored in economics so during his entrance interview questions were about hockey and growing up in his hometown Anchorage, Alaska. When it was their turn to ask the school officials questions, Daniels and Golijanin said they asked questions that showed they researched the school and cared about getting accepted.

One interviewer told Golijanin he knew more about Dartmouth than some of his students.

Don’t do an Internet search for the top five questions you should ask, they said.

“I really wanted to be there and they could tell that,” Golijanin said. Even after med school students should plan to work extremely hard as residents, to the tune of 80-plus hours a week.