Campus News › Philanthropist Bill Cummings tells students to “look for an opportunity and do something with it”
Quick Links
Previous Article Science and Faith Come Together in Search of Solutions to Climate Change April 15
Next Article With National Internship, Theater Major Leaps to Next Stage April 23

“Work hard and save your money,” billionaire philanthropist Bill Cummings advised students gathered Tuesday, April 16, at the Dr. Alfred L. Arcidi Center to learn about his storied career, chronicled in his new autobiography, “Starting Small and Making It Big: An Entrepreneur's Journey to Billion-Dollar Philanthropist.” 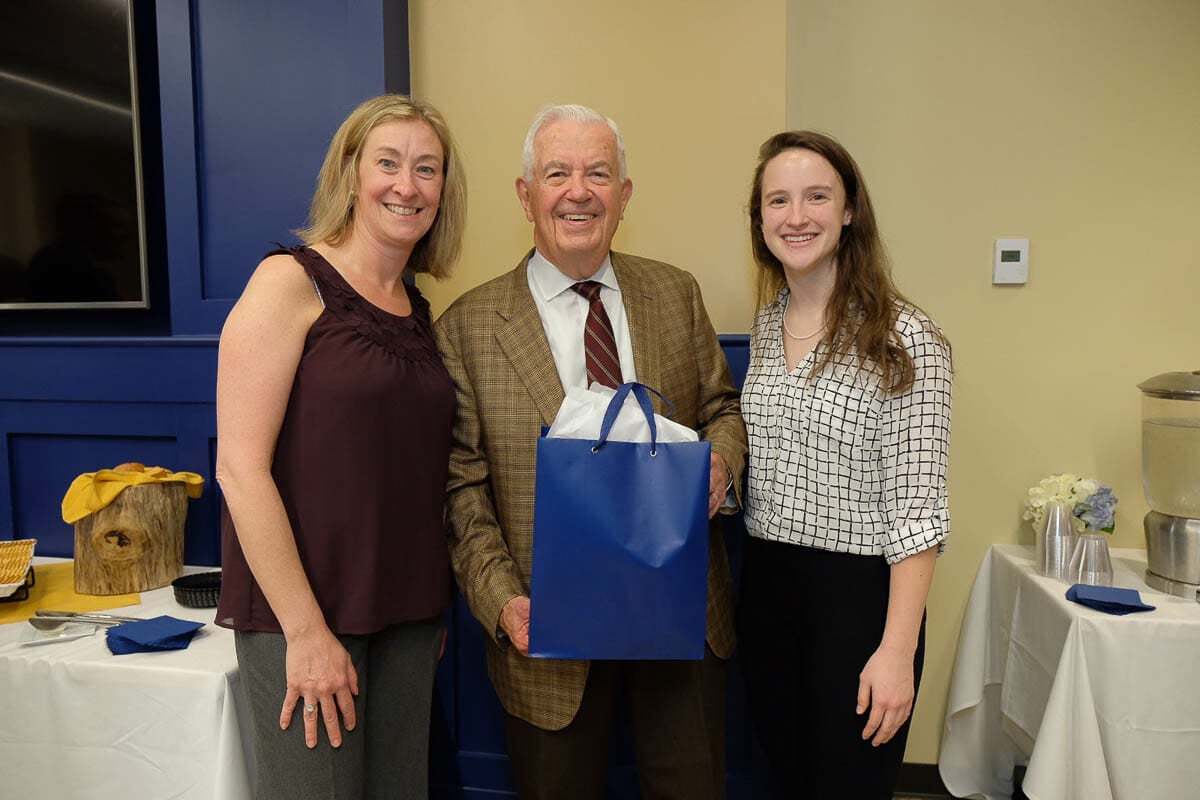 Cummings scrimped and saved on his way to building Cummings Properties and the Cummings Foundation, which has given more than $200 million in grants to Greater Boston nonprofits alone through its hallmark “$100K for 100” annual program.

“He is a true hero in the world of charitable giving,” said Merrimack College President Christopher E. Hopey, who introduced Cummings to about 90 students and faculty.

Cummings spoke fondly about his early career. He wanted to go right to work but a guidance counselor convinced him to go to college first. He attended Tufts University on an Army ROTC scholarship, back when tuition was about $640 a year, he said.

His first jobs were anything but glamorous. To the seniors in the crowd, he said, “You shouldn’t be one bit concerned if your first job isn’t your ideal. Look for an opportunity and do something with it.”

His first big break came when he purchased a  juice company for $4,000 and turned it into a fast growing business by expanding sales to colleges. That success led him into real estate development.

He met his wife Joyce on a sales call. They had four children, all successes in their own right, and founded the property firm in 1969 in Woburn and the charitable foundation in 1986.

In 2015, Merrimack won its first $100,000 grant, which allowed the then-Department of Health Sciences to expand to a school by funding academic training facilities, equipment and programs. A second $100,000 grant in 2018 paid for new programs and research at the School of Health Sciences and supported the graduate work of Jack Twomey Fellow Ashley Hall ’19, who taught health literacy to adults in Lawrence.

“The Cummings grant made all the difference to my graduate education,” Hall said. “The whole thing is humbling.”

Humble is a good way to describe Cummings. He and his wife, who live in Winchester, were early signers of The Giving Pledge, founded by Warren Buffett and Bill and Melinda Gates, which commits the country’s wealthiest entrepreneurs to donating much of their wealth. The Cummings Foundation supports a broad array of causes and institutions, focusing largely on human services, education, health care and social justice.

Despite his entrepreneurial success, he advised students to “take your time” before starting a business. Many in the audience laughed when a student asked how you make good business deals without insulting anyone. Another student asked him to talk about his biggest failure. He answered all their questions and stayed afterward to sign books and talk to students.