Michigan's loss, it turns out, is Lawrence, Massachusetts' gain. Since 2009, Assistant Professor of Mechanical Engineering Rickey Caldwell Jr. has run a summer robotics camp for academically gifted middle- and high-school students in his adopted home state of Michigan, where he attended college. 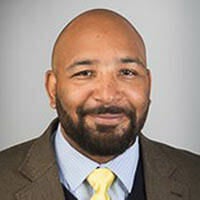 Now that he is a member of the Merrimack College faculty, he wants to give back to students in the Merrimack Valley. So, later this month, he’ll launch a one-week robotics pilot program for up to 20 at-risk students at Lawrence High School.

“The goal is to provide some type of access to summer enrichment,” Caldwell said. “The ultimate goal is to inspire the students.”

Caldwell was introduced to the Lawrence community last semester when he volunteered as a mentor for the high school’s Gearheadz FIRST Robotics team. Before he joined the program, the team had no mentors with a background in teaching.

“The fact we have a college professor there is a huge thumbs-up,” said lead mentor Art Rousmaniere, manager of engineering at Farm Design in Hollis, New Hampshire.

Caldwell’s summer camp will operate independently of the FIRST Robotics program and, due to its short duration, adjust its goals accordingly. Rather than designing a fully functional robot capable of performing specific tasks, the camp students will seek to assemble something that “moves and wiggles.”

Caldwell said a robotics program is an excellent way to get students interested in studying the STEM subjects of science, technology, engineering and math.

Caldwell grew up in North Carolina and holds bachelor’s, master’s and doctoral degrees from Michigan State University. His specialization is in systems and dynamics, which is about how things move.

“That’s where robotics comes in,” he said.

Caldwell has worked on government projects for Mitre Corp.’s National Security Engineering Center in Bedford, Massachusetts. He joined Merrimack as an adjunct lecturer in fall 2015 before being named to the staff as a tenure-track assistant professor last year.