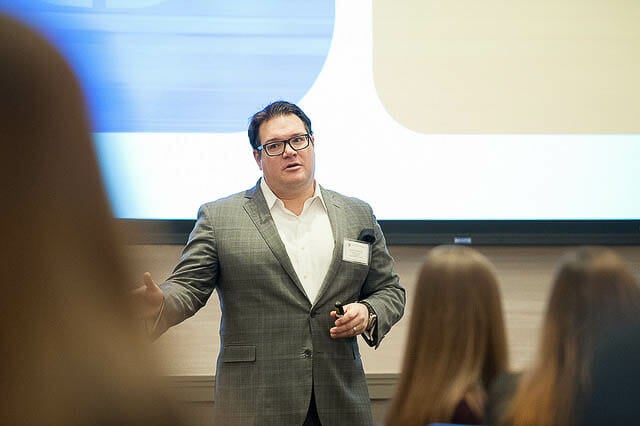 President Christopher Hopey, at the opening dinner, called the PDR “another marker of Merrimack’s broad and deep commitment to the success of our students.”

Elissa Aldrich ’19, and many of the Merrimack seniors who attended the recent PDR arrived feeling a bit tentative about the process of networking, interviewing and landing their first jobs after graduation. But they all left with a boost of confidence and a plan.

“Before I attended the PDR I was really afraid of networking because talking about myself felt like bragging. But identifying my strengths helped validate my leadership and execution skills and it didn’t feel like bragging anymore,” Aldrich said.

“The session before the networking reception really helped calm my nerves so I was able to speak confidently and make some true connections.”

Packed with opportunities to learn and grow, this two-day retreat included a keynote presentation by Kevin Routhier ’99, founder of Coretelligent, group activities for students to work together to identify how their strengths could complement each other’s, and networking opportunities where students learned that “small talk is a big thing” and that networking is really just about chatting with the person in the coffee line, or on the plane, and being themselves.

Before the PDR each attendee completed a self-assessment to identify their top five strengths from a list of 34 soft skills—natural abilities that cut across industries and job levels and include aptitudes like critical thinking, problem-solving, teamwork, collaboration and conflict resolution. Throughout the retreat students worked in groups to identify how their strengths could complement each other’s.

The takeaway? No one is good at everything, and by working with others who are different from them, they learned how to maximize their strengths and minimize their weaknesses.

Business major Sheon James ’19, who as president of the Student Government Association is a natural leader and presenter, admits he wasn’t always the strongest student, going from academic probation to the dean’s list. At the PDR James learned the importance of presenting himself well and had many conversations with potential employers. He went home with a pocket full of business cards and was thrilled to make a connection with the Addison Group—a consulting and recruiting firm in Chicago.

“It was great seeing my peers push themselves out of their comfort zones and work as a group,” James said. “I used to get down on myself because I was afraid to make mistakes, but when the keynote speaker encouraged us not to run from failure, but to learn from it, that inspired me.”

Norina Reda ’16 was one of the first students to attend the PDR when Merrimack began to offer the program to students in 2016. She returned this year as a recruiter for Brown Brothers Harriman (BBH).

When she was a student, the PDR opened her eyes to the real world, pushed her out of her comfort zone, and helped her make a connection at BBH. At this year’s job fair, she was able to focus on the skills the students had, not just their majors.

“Merrimack and BBH both share the same qualities — small, strong values, collaborative, built on a platform to succeed. This year I could really relate to the students, as I was in their shoes two years ago. I attended the PDR when it was first offered and it helped me land my first job,” said Norina.

Thanks to generous sponsors, Merrimack hosts the PDR twice a year to prepare seniors and juniors with skills that they may not learn in the classroom, a program that truly helps to make Merrimack unique.