For Gordene MacKenzie, the time is right to return home. This year's recipient of the 32nd Edward G. Roddy Outstanding Teacher Award has been chairwoman of the Women's and Gender Studies Department since 2001 but she's retirement age and returning to her childhood state of New Mexico. 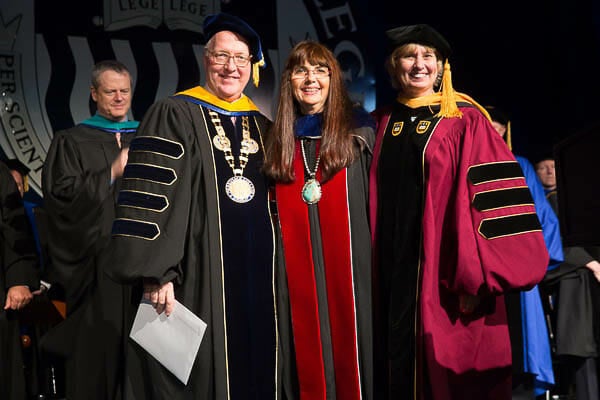 Being named the teacher of the year at the undergraduate commencement May 22 was a shock to the longtime teacher.

“Very humbled; surprised and humbled, I must say,” MacKenzie said. “The first thing that really crossed my mind was huge thanks to my awesome students over the years that I feel I learned from. They helped make learning a collaborative effort and over the years many of our students have amazed me by their insights, creativity and dedication to social change.”

MacKenzie and her life partner Nancy Nangeroni are returning to New Mexico where they can enjoy the freedom of time to pursue their many interests. The Southwest offers great hiking, arts communities, and an activist culture in which they can get involved.

“I will definitely still have my hand in education,” MacKenzie said.

She plans to continue her research and activism work as well as feed her creativity by making jewelry and writing. MacKenzie was a recipient of the prestigious GLAAD Award in the category of outstanding radio and would like to find a venue in New Mexico so she and Nangeroni can return to the airwaves.

MacKenzie began her academic career at the University of New Mexico but was drawn to Merrimack by its strong academia and activism.

“I was impressed by Merrimack’s social justice,” she said. “I’ve always wanted to get students outside the classroom and into the field because I think a lot of learning happens out of the classroom.”

The department soared under MacKenzie’s tutelage. When she took over the Women’s and Gender Studies Department it was so small that it was housed in a storeroom but now has a suite of three offices and a lobby.

She has a master’s degree and doctorate from the University of New Mexico in American studies, including the fields of feminism, sociology and psychology. She’s studied gender from those perspectives as well as the historical perspective.

The key to being a good professor has been the willingness to adapt her teaching to the needs of the students. Her goal as a teacher is to recognize the students who aren’t responding and look for alternative ways to draw out their excitement for learning, MacKenzie said.

MacKenzie master’s and doctorate degrees are interdisciplinary and that’s been helpful with some students who were turned off by a single discipline but got excited when they saw the connections in a complex field.

While she always wanted to make student comfortable enough in class that they would want to do their very best work, she also made it clear that they also learn outside the classroom.

“I have learned so much from my students,” MacKenzie said. “In many ways teaching, I think, keeps us young because you are learning a lot from the students all the time. I think my students have made me a better person.”

The Edward G. Roddy Outstanding Teacher of the Year Award was established in 1985 by then-president Rev. John E. Deegan, O.S.A., to recognize and celebrate Merrimack’s teachers. The first award was given to Edward G. Roddy Jr.  in appreciation of his 25 years of service to Merrimack College.