Professor, on Pope Francis: The church has a voice

Joseph Kelley, professor and director of the Center for the Study of Jewish-Christian-Muslim Relations at Merrimack recently met Pope Francis during a trip to the Vatican. 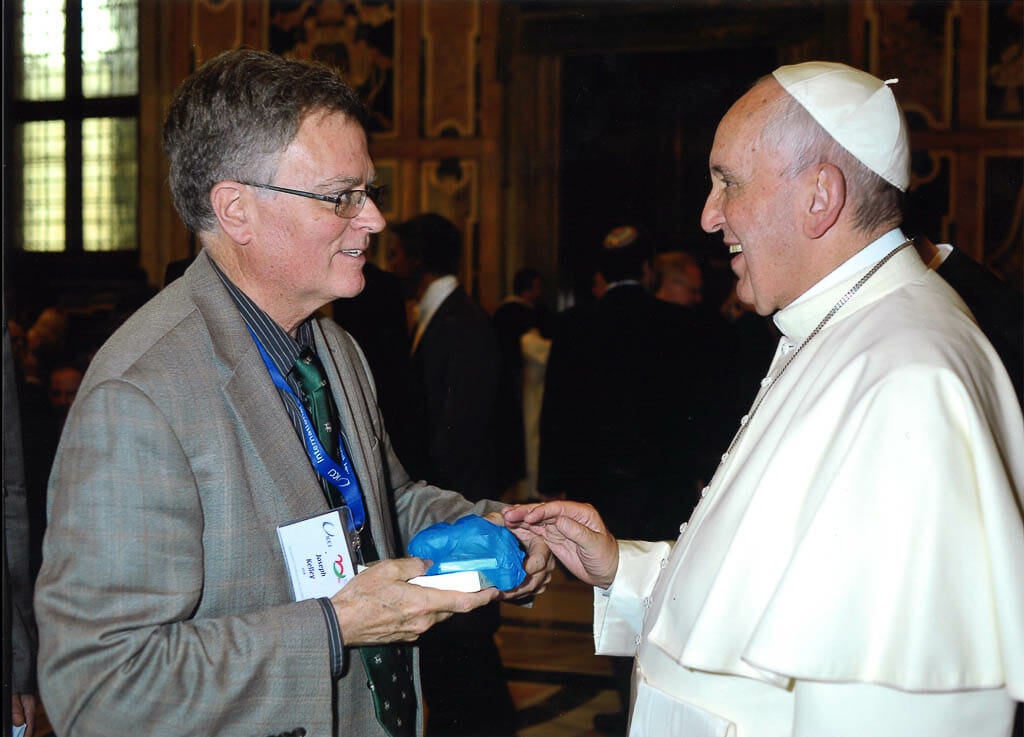 He was attending the annual meeting of more than 250 members of the International Council of Christians and Jews (ICCJ) when the pope granted them an audience July 2 to celebrate the 50th anniversary of the ground-breaking Vatican II declaration “Nostra Aetate,” that opened new horizons in the Catholic Church’s approach to interfaith relations, according to the ICCJ website.

“It lasted about an hour and a half,” said Kelley. “The organization made a formal presentation to him and gave him some gifts. Then the pope responded with a formal statement and then he received each of us individually.”

Q. What was your personal impression of the pope?

A. Very down to earth, very warm. What you see is what you get. He’s very engaging and personable. I thanked him for all he has done for the church and the world over the past several years and I asked him to remember our work here at Merrimack in his prayers (Kelley speaks Italian).

Q. Pope Francis is scheduled to meet with a joint session of Congress Sept. 24 during his visit the United States. Do you think he’s getting too political with this meeting and his encyclical on the environment “Laudato Si”?

A. There is a saying of Mahatma Gandhi that I always liked and he was responding to his critics in the ’30s and ’40s: “Those who say that religion shouldn’t get involved in politics don’t know much about religion or politics.” I think the Catholic tradition has always addressed issues of the common good across society and across cultures. We believe that the church has a voice and a message that can contribute to the welfare of all people and that we must speak what we believe in the public forum as a full conversation partner with other religions and political voices. So people who want to relegate religion to the private sphere and piety, as Gandhi said, don’t really understand the fullness of religion.

Q. What do you expect to come from the pope’s visit to the United States?

A. Two things. I think there will be a very strong emotional and pastoral response to his presence. He’s a world leader that inspires confidence trust and admiration across religious and cultural differences. I think people are hungry for that type of leader.

The other level will be, I think, he will challenge both the political right and political left by his statement of Catholic teaching. I notice both (House Minority Leader) Nancy Pelosi and (House Speaker) John Boehner are Catholic, so they will both like some of the things he says and some things they will probably not talk about. As Americans we forget the pope is head of a worldwide church of more than 1 billion people and that includes hundreds of millions in Africa where cultures and mores are very different than the United States. So sometimes I think when American Catholics or Americans in general encounter the pope, they are encountering someone who also represents parts of the world that are very different from us.

Pope Francis is the third pope Kelley has met.

The Merrimack Choir visited Italy on a concert tour in 1989 and his wife worked through agencies in Rome to arrange a visit. She grew up in Poland and Pope John Paul II confirmed her when he was a bishop there. “So that helped,” Kelley said.

Around 2000 or 2001, he met then- Cardinal Joseph Ratzinger, who was elected pope in 2005 and took the name Benedict XVI. “I literally bumped into him in Rome,” Kelley said. “Neither of us were looking where we were going, and I nearly knocked him over. I felt really bad about that.”