Pope Francis has released his anticipated second encyclical “Laudato Si,” calling for a better stewardship of Earth and equating an indifference toward pollution with sin. 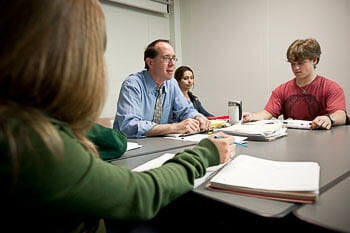 “Climate change is a global problem with grave implications: environmental, social, economic, political and for the distribution of goods,” Francis said in the encyclical. “It represents one of the principal challenges facing humanity in our day.”

The encyclical accuses those with greater resources and economic or political power with apparently being more concerned with masking the environmental problems and symptoms than fixing them.

“However, many of these symptoms indicate that such effects will continue to worsen if we continue with current models of production and consumption,” according to the encyclical.

Professor Mark J. Allman, former chair of Merrimack College’s Religious & Theological Studies Department is a Catholic ethicist whose doctorate from Loyola University of Chicago was on Catholic social thought — the concept behind encyclicals. He plans to use “Laudato Si’” in his Abrahamic ethics class this fall.

A. I would characterize it as prophetic and practical and changes Catholic social ethics in significant ways. I would say in two significant ways: one, Catholic ethics has been relatively weak on environmental issues — actually, all of Christianity has been weak on the environment for centuries. They have treated the environment as a thing used and enjoyed by humans. What the pope has done now is say environmental stewardship is a principal concern of the Christian life. He’s not the first Christian to say that — Christians have been saying for over a century — but to have the pope come out and say it is a different thing. Secondly, in terms of the content of the encyclical, he makes a significant contribution because he connects environmental degradation to human behavior, and that’s what makes it a moral issue. Bad things happen in the universe but this is a bad thing happening on the planet because of the way we live our lives.”

Q. Can the pope’s message for global stewardship carry weight at the United Nations conference on climate change this summer and if so, how?

A. The first answer yes — a big yes — because the pope speaks with a moral authority that no country has. So when heads of countries speak at the United Nations they are presumably speaking in the self-interest of their nation. The pope doesn’t represent a nation; the pope represents over 1 billion of the 7.3 billion people on this planet. You can think of the Catholic Church as the largest NGO (non-governmental organization) the world has ever seen.

I think it’s going to have an impact in the Unites States as well, because when the politicians speak of climate change as legislators they are advocating for their own political platform, so they speak as Democrats and Republicans. The pope has a voice that can transcend that fray.”

Q. How will the encyclical be received politically?

A. Already you can see presidential hopefuls trying to warp the message to their own ends.

Q. Is this an area in which the Vatican should be getting involved?

A. Absolutely. Every pope since Leo XIII in 1891 has spoken on what they call the social problem of the day, and that is the most pressing social, political and economic issue of their time. For Leo XIII it was the industrial revolution; for Paul VI in the 1960s it was nuclear weapons; for John Paul II in the 1980s it was the fall of communism; and for the 21st century it’s the care for creation.