Merrimack's Institutional Review Board has approved research experiments to study the effects of concussions on sleep, emotional reactivity to behavioral tasks and brain activity that are to be conducted in a new sleep lab. 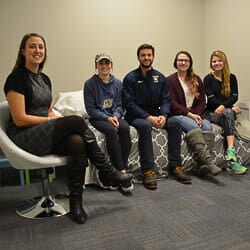 The experiments will be run by Assistant Professor of Pyschology Lauri Kurdziel in the Learning, Memory and Sleep Lab in the new psychology research suite in O’Reilly Hall.

Almost every animal ever studied has some form of sleep behavior; however, scientists are still attempting to understand the functions of sleep and even why we need sleep. Kurdziel is studying preschoolers, to learn why they need to nap, and college-age students, to learn how napping affects emotions and memory.

The sleep lab resembles a comfortable bedroom with a trundle bed, chair and desk, plus a white-noise machine. A Provost Innovation Fund grant paid for an electroencephalography machine to measure brainwaves of volunteer subjects, both while asleep and when awake and actively working on a research task.