Associate professor of psychology Christina L. Hardway was named Merrimack College's teacher of the year for 2015. 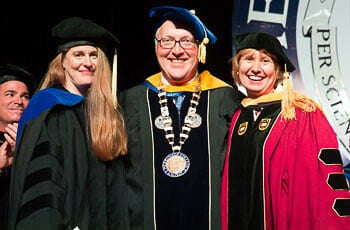 The announcement of the 31st annual Edward G. Roddy Outstanding Teacher of the Year Award was made during the college’s 65th commencement exercises on May 17. The award is named for its first recipient, who was a history professor at Merrimack.

Hardway said she appreciates her kind and supportive colleagues and Vice Provost Cynthia McGowan, as well as her students, who supported her career.

“I’m really grateful to a lot of people on campus for their generosity and support,” she said. “Many colleagues have helped me become a better teacher in ways both small and large, everything from figuring out a better way to teach a particular topic to figuring out a way to better support student trajectories.”

Psychology is the study of the mind and most academic disciplines rely on it, Hardway said. Even bridge-builders need to ask how their edifices will be used.

She promised she doesn’t analyze people when she talks to them.

Hardway said she loves teaching because it shows her the potential for a better world.

“You can help people understand the world in a more nuanced way and live more personally and professionally meaningful lives and in turn make the world more humane,” she said.

Hardway has worked on her teaching style to better connect with her students and found an ally in Director of Media Instructional Services Kevin Salemme, who’s also popular among students. Hardway cares deeply about each student’s personal growth but as an idealist and a female, her style is more naturally formal in the classroom so Salemme has urged her to look at the classroom as a series of personal connections.

“Be in that place a student is at a certain time,” Hardway said.

Some students struggle in class, some soar, and others handle her classes somewhere in between. Hardway tries to get all her students to value their growth as they move forward.

Hardway knew when she was 12 years old she wanted to be a psychologist.

Hardway and her husband relocated to Massachusetts where she continued working on her dissertation under Harvard University professor Jerome Kagan.

Hard work as a researcher and teacher has helped her career, Hardway said.

“Perseverance, that’s what has gotten me here,” she said. “Don’t give up, that’s my motto in life, just don’t give up.”

When Hardway is asked how long she’s been at the college she paused before answering.

“I don’t count life like that,” Hardway said. “I just live life.”