Campus News › Renovations Underway on Chapel in Austin Hall to Give it a New Look
Quick Links
Previous Article From Andover to Malaysia with Love, Friends for Life September 23
Next Article ‘Lunch in Lawrence’ Brings Colleagues and Local Community Together September 30

There are more renovations moving forward on Our Mother of Good Counsel Chapel on the second floor of Austin Hall, beginning with new windows and including installation of a pipe organ. 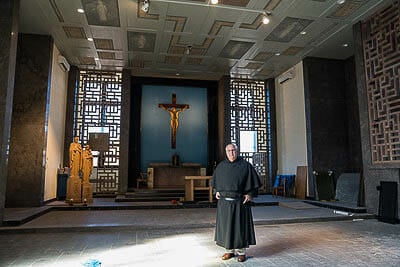 When the chapel renovations are completed, the space will be available to use for secular and religious activities, said the Rev. Ray Dlugos, O.S.A.

“The first thing that had to happen was for the windows to be replaced because they were falling out of their frames and were cracked,” Fr. Ray said.

The new windows are similar in appearance to the original windows that dated back to when Austin Hall was built in the early 1950s but the colored glass is being replaced with clear glass. However, the etched glass depicting the stations of the cross is being preserved and installed in the new windows. Curtains will be installed to block sun and excessive heat.

The altar will be moved so that it stands in the elevated sanctuary with the tabernacle.

The choir stalls with stadium seating where congregants formerly sat were unpopular with students because they were forced to face each other. They have been removed so the seating will be on level ground and, instead of pews, the chapel will have chairs facing toward the altar that can be removed or reconfigured for events, Fr. Ray said.

“The space, because it is now flexible and not fixed with choir stalls, can be used for other things besides worship,” he said. “This is a place where we can have concerts, lectures, semi-formal meals and other events.”

A curtain will be used to block the sanctuary from the seating area during secular events.

In addition to a new sound system, a pipe organ donated by a church in Wellesley, Massachusetts will be installed. The church was undergoing its own renovations that didn’t include the pipe organ so the only cost to the College is its refurbishment and installation, Fr. Ray said. It will be installed to the side of the altar in an alcove where chairs were previously stored.

A new heating and air conditioning system was installed last year in the first phase of renovations.