The Rev. Rick Piatt, O.S.A. and Hugh Hinton are teaming up to introduce the lunchtime Atrium Concert Series in the Rogers Center for the Arts starting with Kevin Wilson performing on the American banjo Oct 7 at noon. 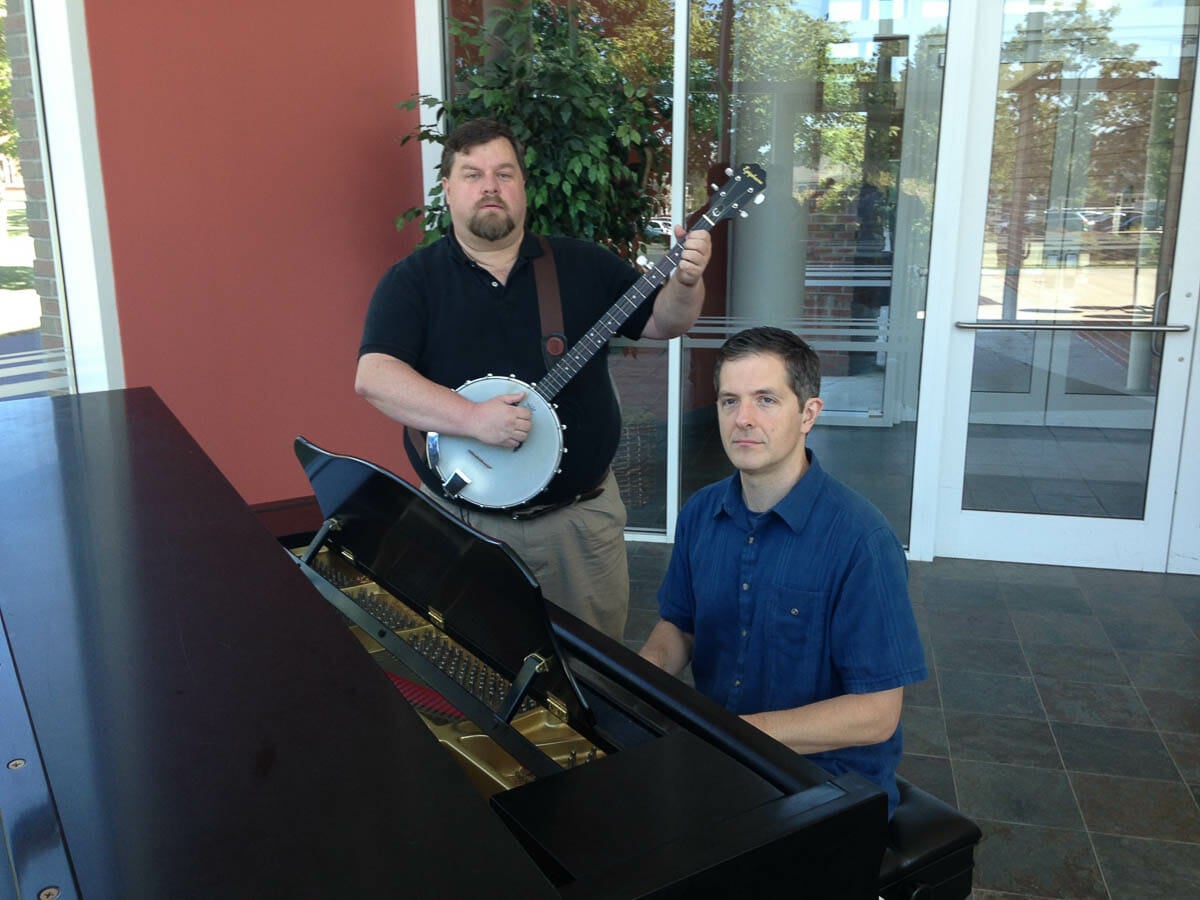 The series is scheduled to continue weekly through the first semester and culminate with a performance of Arlo Guthrie’s classic seasonal song “Alice’s Restaurant” featuring student Mike Semonelli ’17 backed-up by faculty and students Nov. 18.

The six-concert series will include bluegrass, jazz, classical, and Broadway musical genres and is open to all Merrimack College students, faculty and staff and members of surrounding communities.

“We’re going to have a real variety of music,” said Hinton, the coordinator of campus music activities in the Mission & Student Affairs office. “We really have a wide range of music to appeal to everybody.”

Piatt said the concert series will expose more people to the Rogers Center to expand its uses.

“We’re really excited about this and hoping to attract the Merrimack community that may not be able to attend an evening performance and hear some of the wonderful music from around the campus,” Hinton said.

Piatt took over as director of the Rogers Center July 1 and discussions about the concert series started in August.

“We’re hoping to draw the Merrimack community ever-more into what’s happening at the Rogers Center and that means not only the evenings,” Hinton said.

Wilson is an adjunct professor in the Religious & Theological Studies Department.

The banjo has remained a popular instrument and will be featured in an off-Broadway bluegrass musical starring Steve Martin and Edie Brickell, Piatt said.

“I feel honored to lead off the series, and a bit nervous as well,” Wilson said. “With a new series, both the audience and performer come in not knowing what to expect.”

The concert lineup continues Oct. 14 with Chris Gagne and Paul Gersey in a jazz combo; Oct. 21 with the cast of this fall’s “Cabaret” production; Oct. 28 with Hinton on the piano; Mackapella will perform Nov. 4; then the series wraps up with “Alice’s Restaurant” Nov. 18.

Wilson said that even though most people are familiar with stringed instruments such as guitars, violins and cellos and only have a passing familiarity with the banjo, it’s the quintessential American musical instrument. What banjo music most people have heard is usually limited to bluegrass but he plays a style called clawhammer, or frailing.

“It’s an older style with its roots in southern Appalachia and I enjoy introducing people to this unfamiliar style,” Wilson said.

Piatt and Hinton plan to have a concert series for the spring semester as well.