When the question “What did you do on your summer vacation?” comes up, one rising Merrimack senior has a killer answer:
I was in a gangster movie. 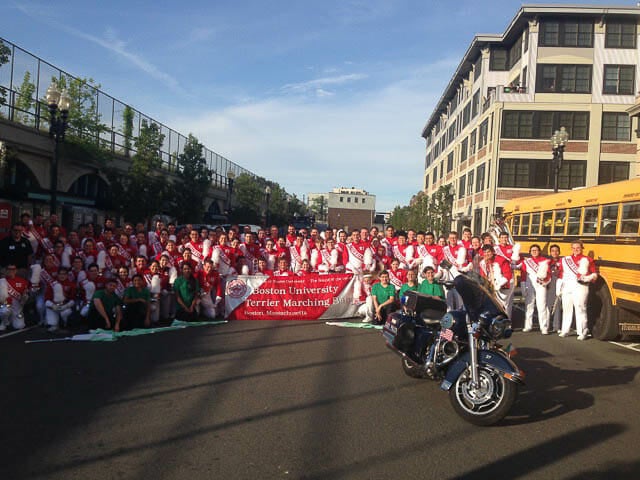 “It was really the experience of a lifetime,” said Canyes of Haverhill, Mass., a communications major and music minor.

Canyes, who played saxophone in high school and performs in Merrimack’s jazz and pep bands, saw the call for musicians on Facebook and signed up. The group met at 4 a.m. June 23 at Boston University — BU’s band formed the core of the film group — and took buses to Lynn, Mass., where streets had been set up to look like the South Boston of Whitey Bulger’s heyday.

“It was very chaotic,” Canyes recalled. “There’s a lot of waiting around, and you don’t get much information. You stand there and wait for someone to tell you what to do, and you do it.”

She did see Depp and Cumberbatch on set, but didn’t get to meet them. “Johnny Depp can pull it off as Whitey Bulger,” she affirmed. “He’s really intense looking.”

She also couldn’t take photos: Cell phones were forbidden on set, she said, though the film crew didn’t have to confiscate devices. “We’re good students,” she said. “Plus, we’re all hoping we get invited to California so we can be on the red carpet” when the film is released in fall 2015.

Canyes, who is working at Teradyne in North Reading during the summer, keeps busy on campus as president of the Art Warriors, a member of Lambda Pi Eta and, of course, as a member of Merrimack’s bands. It’s an impressive resume that she hopes will propel her to graduate school for communications, but her one-day film career already made big waves at home.

“My parents were really impressed,” she said. “My mom was freaking out.”