Campus News › Science and Faith Come Together in Search of Solutions to Climate Change
Quick Links
Previous Article Lifelong Teacher, Lifelong Learner April 12
Next Article Philanthropist Bill Cummings tells students to “look for an opportunity and do something with it” April 17

For organizers of the April 10 conference “Religion, Science and Ecology: Shared Responsibility for the Future,” it is time for science and religion to work together in saving our planet from climate change. 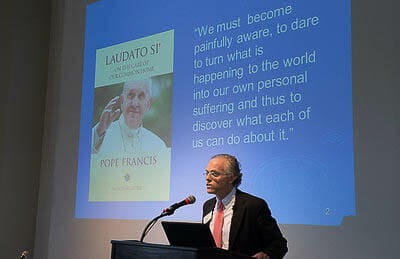 Gina McCarthy, the former administrator of the Environmental Protection Agency and now a professor at Harvard University T.H. Chan’s School of Public Health, was the closing ceremony’s keynote speaker.

“She had a lot of ideas that fired up everybody and had them wanting to get out there and do a lot of things for the environment,” said McQuade Library instruction/liaison librarian C.J. Wong, who delivered the opening prayers with campus minister Nicole Benevenia from Campus Ministry.

The conference grew out of a seminar the Archdiocese of Boston’s Cardinal Seán O’Malley held for faith leaders and leading scientists from throughout New England in February 2018 that was focused on issues of sustainability and climate change. Professor Joseph Kelley, director of Merrimack’s Center for the Study of Jewish-Christian-Muslim Relations, was invited to attend.

“The cardinal’s point was that scientists and religious leaders working together can accomplish more than working separately,” Kelley said. “Out of that formed a group called the Faith Science Alliance for Climate Leadership.”

Kelley looked for ways to support the alliance between the scientific and religious communities. With the backing of Provost Alan Weatherwax and Vice Provost Jonathan Lyon, Kelley and Peter Ellard, the dean of Student Success and Academic Support, organized the April 10 conference using resources of the JCM and Merrimack’s Center for Sustainability and the Environment.

“The model we used was one of dialog between scientists and people of faith on this issue,” Kelley said.

The tone for the conference was set in the opening keynote address given by Rich Miller, a professor of theology at the Jesuit-run Creighton University in Omaha Nebraska who presented the scientific background of climate change.

“He put out the scientific facts that show the seriousness of the problem,” Kelley. “He gave statistics and scientific analyses and suggested our response has to be both scientific and technological as well as moral and spiritual.”

In keeping with the spirit of the event, organizers served a largely locally sourced vegan lunch and dinner with biodegradable flatware, plates and cups.

“One of the large contributions to global climate change is the fossil fuel use that goes into transporting our food – a ship full of food from South America uses a lot of fossil fuel,” Ellard said. “Additionally, the raising of animals – particularly red meat from cows – is highly dependent on fossil fuels. There is the fertilizer used  to grow the feed corn, plus the methane – a greenhouse gas – released by the cows, and then the fuel to transport the meat. Eating as locally as possible is more sustainable.”

Climate change will affect all social justice issues such as homelessness, hunger and immigration, said visitor Bob Wald, of Tewksbury.

“I think it’s an extremely important subject,” he said.