When Kaycie Kasza-Hook '20 got a job at Petco as a freshman, she fell in love with animals and realized her true calling is animal care and not in the business world. So she switched majors from business to biology with the goal of becoming a veterinarian. 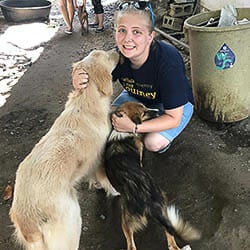 Looking for more hands-on experience with animals than the pet store could offer, Kasza-Hook joined 30 other students from across the country for a three-week study-abroad trip to Thailand, organized by Loop Abroad, to care for elephants and other animals. The students spent their first week at the Elephant Nature Park learning about animal rescue and conservation while treating the behemoth pachyderms.

“It was really incredible,” Kasza-Hook said. “We got to ride around with the elephant vet and clean the wounds of elephants that had stepped on landmines.” Landmines are used to clear land for development and sometimes elephants are injured by the mines.

When she wasn’t working alongside a veterinarian diagnosing ailments and injuries, Kasza-Hook helped feed, bathe and care for the elephants. The park houses more than 60 elephants that were rescued from abusive lives trekking tourists, performing in circuses, and carrying lumber.

Kasza-Hook was touched by the “humanity” of the elephants. One elephant named Depu cared for its friend Suk Jai that was blinded by circus lights and camera flashes. Another elephant mourned the loss of its friend by circling the grave. Yet another would not go near a new handler at the park because it recognized him from 20 years earlier when he had abused her.

During her final week in Thailand, she visited the island of Koh Tao where she helped build an artificial reef to protect marine life.

Kasza-Hook enjoyed her summer so much, she plans to work at a wildlife conservation in Australia that rescues indigenous animals such as wallabies, koalas and kangaroos next summer. She hasn’t decided, however, if she wants to focus her career on caring for small animals or the big ones.