Shannon Doucette '20 is expecting a finger-snapping, joyful time when she makes the leap from the Rogers Center to Symphony Hall this month as the newest — and possibly youngest — member of the Boston Pops Gospel Choir. 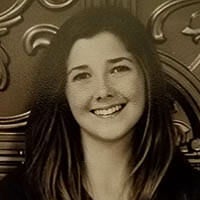 The 18-year-old soprano is one of a handful of new singers joining the choir for its 25th anniversary performance of Gospel Night at the Pops, starring Grammy-winning artist CeCe Winans, on Saturday, June 17, at 8 p.m.

“Gospel is such a fun genre — much more lively than other genres,” Doucette said. “It requires good technique — you have to hit the right notes —  but there’s also a strong focus on the meaning (of the music).”

A rising sophomore, Doucette has been singing since she was about 10 and taking lessons off and on for the past two years. She still takes voice lessons on campus with Christi Catt, an instructor in voice in the department of visual and performing arts.

As a member of the Merrimack Concert Choir her freshman year, Doucette took part in the Intercollegiate Choral Festival at Endicott College in February. The director of that choir, Dennis Slaughter, artistic director of the Boston Pops Gospel Choir, invited all the participants to audition for the June 17 concert. Doucette said she and one other singer, from Boston College, took him up on the offer.

Doucette believes she was the youngest, or among the youngest, to attend the April 29 audition, in Milton, Massachusetts. Upon her return to campus, sometime around midnight that evening, she discovered an email bearing the news she had been selected for the special honor.

“I kept having to reread the email to make sure I wasn’t dreaming because it has been my dream since I was 16,” Doucette said. “To get it at such a young age is really cool.”

Tickets to the performance range from $32 to $93 and are available at the Boston Symphony Orchestra website.