Merrimack College student engineers have advanced to the national finals of the Steel Bridge Competition. 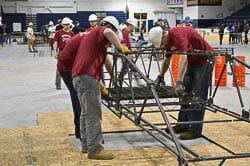 The finals will be held at the University of Missouri-Kansas City during Memorial Day weekend.

Merrimack students earned third place in the New England Regional Student Conference and Steel Bridge Competition, held on campus April 11. The competition is sponsored by the American Society of Civil Engineers and the American Institute of Steel Construction.

UMass Amherst, Northeastern University, and UMass Lowell rounded out the top six finishers. The other 10 schools in the regionals either didn’t finish the competition or didn’t take their bridges to the competition.

The regionals started April 10 when teams checked in and submitted their written reports on the morals and ethics of the engineering field. Merrimack’s report was written by Leyna Tobey, ’17, of Augusta, Maine.

Merrimack’s team worked on final construction preparations for its entry in the Austin Hall garage until about 2 a.m. and then was back at work at 5:30 a.m. April 11.

“Little deprived of sleep but that’s what college is all about, especially engineering,” said team member Marcus Swedberg, ’16, of Moultonborough, N.H.

Swedberg is a center on Merrimack’s basketball team. He competed in the concrete canoe contest a year ago but this year decided to take part in the steel bridge.

“Especially since we’re hosting, I wanted to be more involved in steel bridge,” he said.

Students spent hundreds of hours conceptualizing, designing and building their entry since last fall but as the hosts they also had to organizing the details around running the regionals. Meanwhile, they were responsible for their normal school work, clubs, sports and student life.

Even though Merrimack’s team finished fourth in the same regional competition a year ago, Merrimack had an additional challenge this year because most teams that host the competition are so preoccupied by the logistics of putting on the contest that they finish out of the running.

“That, and I think it’s great to have all the schools centering on Merrimack,” Veletzos said. “To be able to do that is pretty cool.”

“The amount of adversity we had to overcome this year, not only personal things in the department, but to put on an event of this magnitude for a small school and to overcome and do extremely well, it feels great,” Peterson said. “It feels unbelievable, it feels like we’re on cloud nine.”

Kristen Page, ’16, of Worcester, Mass. was chairperson of the planning committee. She began the design work for the bridge as part of Veletzo’s structural analysis class last year and then Ryan Boutin, ’16, of Coventry, R.I., led a committee of students that refined plans. Jeffrey Ziske, ’16, led fabrication efforts and contributed to design work.

Stephen Hennessy, ’17, of Holliston, Mass., and Alex Juliano, ’17, of Lynnfield, Mass. and a member of Honors Program were co-captains of the building committee.

The ASCE started the steel bridge competitions modestly in 1989.  It has grown steadily and now schools in 20 regions around the country compete for the right to go to the national finals. The top three winners in each region compete nationally.

Students build bridges to demanding specifications and are then judged on a myriad of criteria, said ASCE volunteer Tony Puntin, of Concord, N.H. who teaches a civil engineering class at Merrimack. Criteria include aesthetics, design, construction time, deflection, and weight.

Each bridge must hold at least 2,500 pounds of steel plates that are stacked during judging.

To prevent students from submitting easy-to-assemble bridges to the competition, each piece had to fit inside a six-inch by 4-inch box that was 3 ½ feet long.

Those are two real-world categories that need to be considered,” Peterson said.

Each team had the flexibility to develop its own concept for their bridge based on the basic guidelines.

There are significant changes to the guidelines every three years to prevent teams from copycat submissions based on past winners, Puntin said. This was the first year of the latest rules changes.

“Our big change this year was connections and we moved dimensions a lot,” Puntin said.

To give the competition real-life characteristics, there were designated “water” spots as if teams were building over a river so if parts or tools fell in those areas they were lost. Likewise, if a team member stepped out of bounds, they were replaced as if they had fallen in the river.

There were no time limits on construction but sizes of teams and the construction times were factored into scoring, Puntin said.

“All these get factored into what is the best bridge,” he said.

“This is a real-world design problem,” Parucki said. “It’s not a balsa wood type of thing.”