Girard marketing and management majors and minors joined finance majors for the first time this year to visit alumni in NYC in conjunction with the annual trip to the G.A.M.E. Forum. 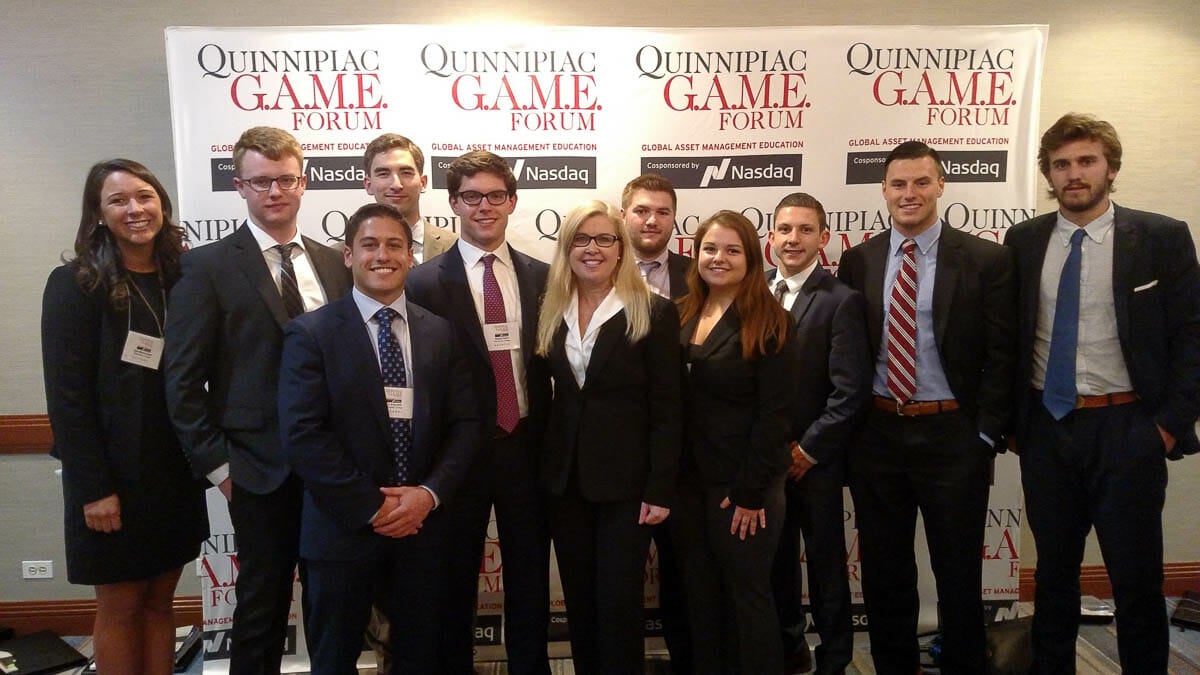 Each spring Girard School students are reminded of the importance of networking when they travel to New York City for the G.A.M.E. Forum

“Having a large and useful network is essential in most, and helpful in all, career paths. This trip provides a rare opportunity to connect with established alumni and financiers who just might have a job opening,” said Brian VandenAkker ’17, a finance major, after the trip in early spring that took students on visits ranging from PIMCO to The Carlyle Group to Meredith Publishing.

During their visits, they learned that the best job candidate is a well-rounded candidate. For instance, Raymond Chandonnet ’87, principal and founder of Second Act Capital Partners, majored in computer science at Merrimack.

“This was a common theme from many of the professionals and alums that we networked with: having some sort of computer science or mathematical background helped train their minds to work in models, which gave them an advantage,” said Brianna Roberts ’17, a finance major. “This also helped set them apart in terms of competition, which is another point that Ray stressed. He really advised that we stay curious and learn many things that aren’t necessarily related to finance.”

Jamie Cortes Torres ’17 was impressed that three of the alumni whom students met played sports at Merrimack. “This was a very good feeling for me, as I play soccer here at Merrimack,” said Cortes Torres, who has a double concentration in international business and finance.

Andrew Braithwaite ’10, a senior associate of The Carlyle Group and originally from Canada, played hockey at Merrimack and was named the Hockey East Top Scholar-Athlete three seasons in a row.

“It’s nice to see alumni from your school achieve the same level of success as people coming out of bigger and more well-known schools. Andrew was very smart and very supportive of us, especially the international students that we brought on our trip,” said T.J. Antonetti ’16, who has a double concentration in marketing and finance and a minor in economics.

Marketing and management students visited with Lee Slattery ’81, a member of the Board of Trustees, at Meredith Publishing and had lunch with Ann Daw ’76, former president of the Specialty Food Association.

Daw’s “experience and expertise reflected in the way she talked to us,” said Latika Karnani, a graduate student in management science. “She focused a lot on networking and how people are ready to help you, but how you must first be proactive in talking to people.”

“Spending time in New York City with my fellow classmates and friends for four days was an incredible experience,” said Cortes Torres. “Normally we spend time together in the lab or somewhere on campus, but going with them around NYC and having lunch and dinner together, getting to know them better, it was a great experience.”

The result is a student better prepared for the rigors of seeking that first job.

“By meeting with alumni and going to various companies, your confidence and overall ability to network with people improves dramatically,” said Logan Cawsell ’16, a double concentration in finance and marketing. “You’re going to have a much easier time going into interviews and events to come.”

The Girard School is grateful to the following alums and friends of Merrimack and their colleagues who made time for our students in NYC: