Campus News › Students, Clubs and Orgs Honored at Merrimack College’s L.E.A.D. Awards
Quick Links
Previous Article From the Eyes of the Boston Red Sox May 3
Next Article Merrimack College selects José Rafael Sánchez as next dean of Science and Engineering May 6

The annual ceremony, held in the Rogers Center for the Arts on April 27, recognizes students and groups that have made impactful contributions to the campus community over the past year. 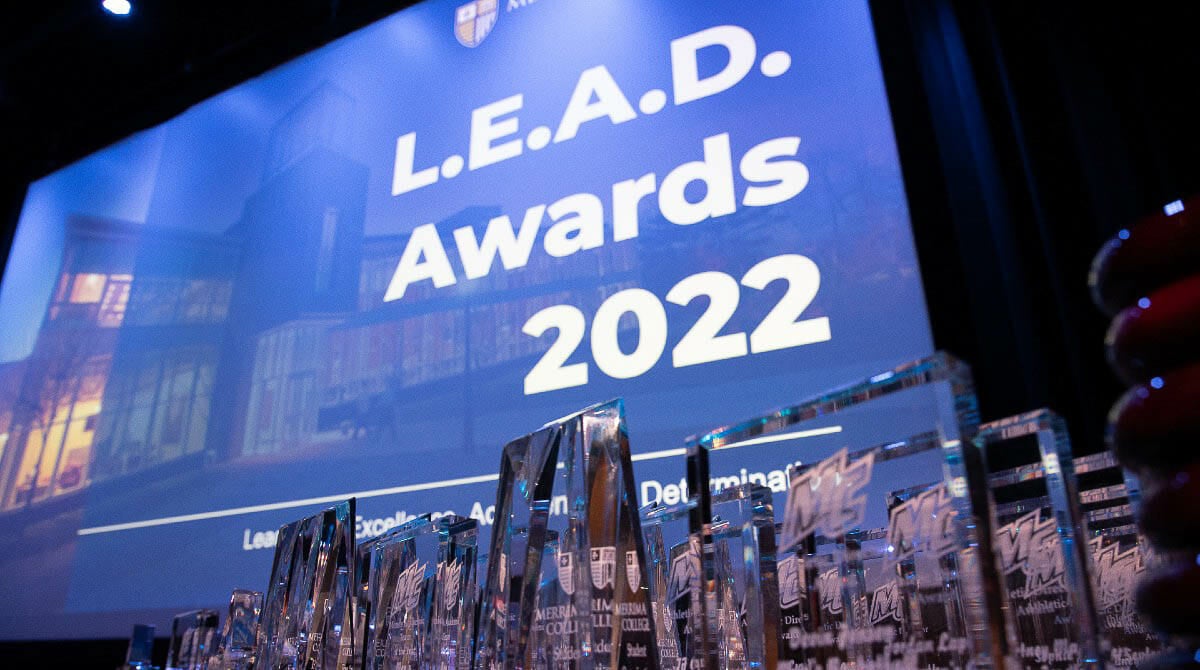 Merrimack College’s annual L.E.A.D. Awards celebration of students, clubs and organizations that make the campus a community was held on April 27 in the Rogers Center for the Arts. More than 300 people attended the event, the first time it was held in-person since the beginning of the pandemic.

Antonio Willis-Berry, director of residential life, served as the master of ceremonies, and the event featured a prayer from the Rev. Raymond Dlugos, O.S.A., vice president for missions and ministry, and remarks from Allison Gill, vice president for student affairs and dean of students.

Over the past year, 15 new student organizations were added at Merrimack, including the Asian Student Involvement Alliance, the BlockChain-Crypto Club, the International Student Organization and Women in STEM. Additionally, student leaders and the Office of Student Affairs hosted more than 600 events over the past year.

The SWAG Award is presented to students or student organizations that create a positive impact on the Merrimack community and are examples of what it means to be a Merrimack Warrior.

Cultural Program of the Year

This award is given to the program that educated and fostered open conversations about diversity and inclusion on the Merrimack campus.

Cultural Organization of the Year

This award recognizes a student organization that has cultivated awareness of diversity and inclusion on campus through programing, lectures and informational events.

These awards are presented to students who stand out among their peers as those who exemplify enthusiasm in Merrimack College through their attitude, behavior and involvement. They maintain high standards of learning, are involved in a variety of facets of campus life and serve as role models to other students.

This award is given to a student leader on campus who is actively involved in student organizations and various offices on campus. They support campus events and encourage others to support and participate in campus events and initiatives.

This award is given to the students or organizations that best exemplify the Augustinian Catholic values of Merrimack College.

Arts Organization of the Year

This award is presented to a student-run arts organization that has contributed significantly to the cultural climate and fine arts atmosphere of the College and the surrounding community.

This award is presented in recognition of outstanding character and unheralded service to the Merrimack College community.

Campus Wide Program of the Year

This award is presented to the student-run program that most successfully developed, promoted, executed and had an obviously positive impact on the Merrimack community.

Academic Organization of the Year

This award is given to the academic affiliated student organization that demonstrates a commitment to academics and a dedication to developing skills through co-curricular activities.

Student Org of the Year

Association of Latinos Moving Ahead

This award is given in recognition of outstanding service to the Merrimack College community. The award was established by the Senior Class Gift of the Class of 2010 in honor of Travis Kong, a member of their class who passed away during his sophomore year.

This award is presented to a senior who is a role model for others and who, through his or her lifestyle, emulates Fr. Murray’s concern, open mindedness and compassion for others and makes a conscious attempt at social and spiritual growth. The award was established by members of the Class of 1983 to honor Fr. Murray, a former vice president for student life at Merrimack.

The Merrimack Medal is awarded to the senior who exemplifies outstanding character and achievement of service to their classmates and the Merrimack College community. This is considered the most prestigious non-academic award.