Merrimack College recently won a $5,000 grant from Sodexo Foundation to start a Campus Kitchen project that will help feed the under-privileged in the Merrimack Valley, including Lawrence. 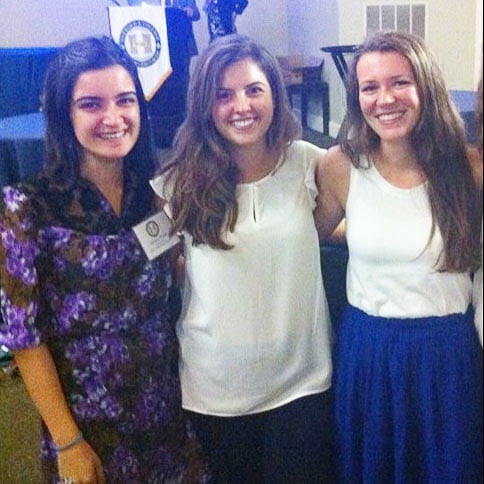 Merrimack College recently won a $5,000 grant from Sodexo Foundation to start a Campus Kitchen project that will help students feed the poor in the Merrimack Valley.

“It was really the students who drove this project,” said assistant professor Michael Corcoran in the Health Sciences Department.

After voting closed, Sodexo decided to give grants to the top three finishers.

She and Sodexo officials visited the nearest Campus Kitchen, at UMass Boston, and its coordinator Courtney Casper for insights and ideas.

McCarthy approached the Rev. Ray Dlugos, O.S.A., for his support, and Corcoran during the fall semester for advice because she wants the meals to be nutritious. Corcoran recommended McCarthy team with Amy Byrnes ’16, an environmental studies and sustainability major from Plymouth, Mass.

“We got together and after we paired up it was so much easier because we were able to divide and conquer,” McCarthy said.

As much as 40 percent of the food in the United States is thrown out each year, according to a 2013 report by Harvard Law School’s Food Law and Policy Clinic and Natural Resources Defense Council, which cited estimates from the U.S. Department of Agriculture and the U.S. Environmental Protection Agency.

That includes leftover food and supplies at restaurants such as Sparky’s.

Restaurants make extra food to ensure they have enough for more-than-expected customers. The Campus Kitchen team plans to work with Sodexo to give excess food and ingredients to area families.

Not all underprivileged families are on government-sponsored food programs and even then there’s not always enough food so the program can be especially helpful on weekends and school vacation weeks.

“There is a lot of food insecurity in this country,” Corcoran said. “About 22 to 25 percent of children don’t know where their next meal is coming from in this country.”

So McCarthy and her team will create a system with Sodexo to deliver excess food made in Sparky’s, or in other cases Campus Kitchen volunteers will prepare the food themselves. A third option will be to give the raw ingredients to families to prepare food at home.

Sparky’s is offering to provide leftover ingredients such as beans or rice at the end of each week. McCarthy and Byrne have also reached out to area businesses for donations and now that they have non-profit status they’ll make a second entreaty for weekly donations.

“We love how we can recover food from the dining hall,” McCarthy said. “We don’t want to go out and buy food, we want to recover food before we go out to buy. We want to be sustainable as a college because we think we have the means to do that.”

Whole Foods Market in Andover has already offered to team with Merrimack’s Campus Kitchen. In addition to donating produce, the grocery chain is offering to give Campus Kitchen proceeds from a “Five Percent Day” in the fall to help stock the pantry.

McCarthy and Byrne have already had one can drive on campus and plan to have more.

Campus Kitchen has secured its nonprofit standing, so McCarthy and Byrne are lining up partnerships with area restaurants and grocers asking for supplies.

“Now we’ll go back to those restaurants and ask wheat can we get on a weekly basis,” McCarthy said.

McCarthy and Byrne are planning to start Campus Kitchen in the fall semester and will operate only on Sundays. They’re hoping student-athletes who want to perform volunteer work can take part along with other students who need community service work on Sunday afternoons, which is about the only time they don’t have practice.

They’re planning to start slow to ensure they can manage the operation and want to serve soup as a staple of the kitchen.

Campus Kitchen organizers are hosting a celebration to thank the Merrimack community for its support during voting for the grant; the celebration will be in the Sakowich Campus Center first floor lounge April 5-7.