While many of their peers were hitting the beaches of Florida or hanging out at the nightclubs in Aruba, about 85 Merrimack students spent their spring break last week offering help and hope to some of the country's — and world's —most underserved populations. 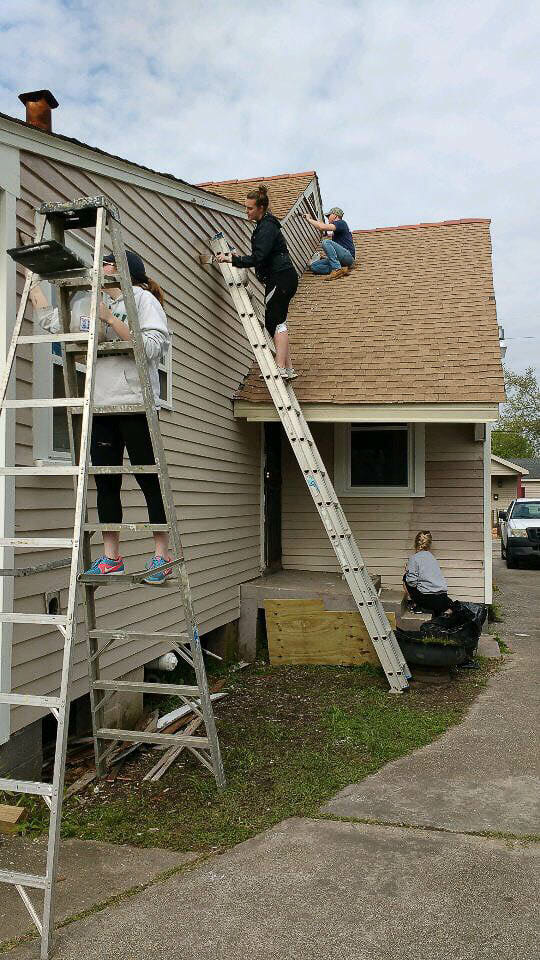 And, if you talk to the students who participated in one of many alternative spring breaks sponsored by the college — in Baltimore; New Orleans; Wheeling, West Virginia; San Diego; Managua, Nicaragua; and Pine Ridge, South Dakota — you’ll find they learned a lot about themselves as well.

“The whole week was amazing,” said campus minister Cara Annese, who led the trip to New Orleans’ Lower Ninth Ward. “I think we do this because we want students to realize they don’t just go down there to do something for someone, but to provide hope for people.

Joanna Gormley ’18, of Lowell, Massachusetts, said the trip to New Orleans was a moving experience.

“It made me realize how powerful hope is,” Gormley said. “The people in the Lower Ninth Ward were some of the kindest and most resilient people I have ever met, despite the unfortunate conditions in the area due to Hurricane Katrina. It is really great knowing that our service not only helped repair houses, but was also a source of hope for the community as a whole.”

Father Stephen Curry, O.S.A., and Domenic DiVincenzo, associate director of the Sakowich Campus Center, led the trip to Pine Ridge, South Dakota, a reservation for the Oglala Lakota Native American tribe. With an average annual income of $7,000 and an unemployment rate pushing 90 percent, it is one of the poorest areas in the country.

“There, the people live in dilapidated trailers, many don’t have water or electricity, or steps going in and out of the trailer, Father Curry said. “They don’t have beds.”

The 14-person mission to Pine Ridge built 13 bunk beds, then bought mattresses and bedding for them. They also built small porches with steps for two homes and chopped firewood for area residents to stay warm.

“They were very welcoming to us,” Father Curry said. “They shared their spirituality with us.”

In Nicaragua, Merrimack partnered with Mustard Seed Communities to help out at an orphanage for children abandoned by their families because of physical or mental disabilities. The 11-person mission, led by campus minister Jeffrey Wallace, spent a week living in the orphanage compound and caring for the children.

“I think the most important thing was spending time with the children and being immersed in life in the compound,” Wallace said.

Students on the various trips reflected daily on the things they learned.

“Merrimack serves others and learns the Augustinian values of unity and love,” Father Curry said.