Tyler Shaffer '16, and Adam Kalogeros '18, sat in the new WMCK studio in Cushing Hall doing some production work for their radio show this week, leading up to the station going live on the Internet at 9:30 a.m. Oct. 5. 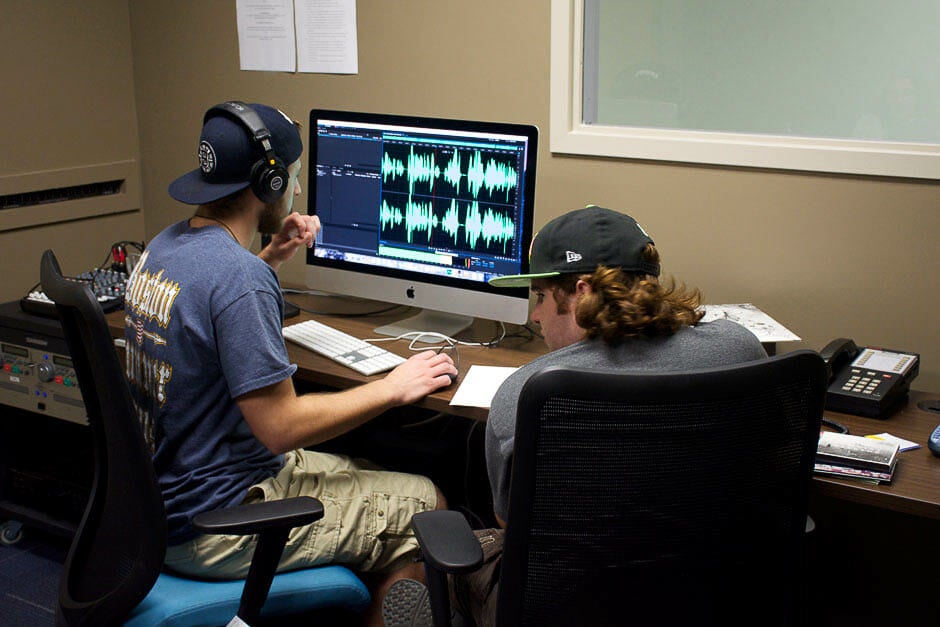 The station’s link for listeners will be available at Merrimack’s website at www.merrimack.edu/wmck.

The Rev. Rick Piatt will offer a blessing for the station. With remarks by President Christopher E. Hopey and Dean of Liberal Arts Kathleen Tiemann, before Radio Club co-presidents Lindsy Goldberg ’15 and Mike Giammasi ’18 cohost a one-hour program.

A show featuring Shaffer and Kalogeros is set to air Monday from 8 to 9 p.m. “Just before Monday Night Football,” Shaffer said.

The station will feature around-the-clock webcasting, even if some of it will be reruns.

Recruiting netted 42 on-air personalities. They all took part in at least one of the 18 30-minute training sessions that Goldberg held recently.

“We feel really good,” she said. “We got a great turnout with our recruiting. We have disc jockeys with different ages and majors.”

Programming will be diverse. The lineup includes shows featuring music from “live” albums; another will feature “unpopular songs” by popular artists; there will be a Spanish language show; and a show about books.

“They are reading a book each week and making a playlist that will go with the theme of the book,” said the station’s advisor, Communications Arts and Sciences associate professor Jake Turner.

The station is part of a three-pronged program that includes a radio production class taught by assistant professor Melissa “Mish” Zimdars teaches, and the radio club. “Dr. Zimdars is teaching us how to perform on the air and wants our final project to be a something we can broadcast,” Giammasi said.

The station was the idea of Lisa Vassallo ’15, who suggested creating WMCK as a capstone project, with Turner as advisor, and got the blessing from former Honors Program director William Wians. She appealed to the Student Government Association for support using a Power Point presentation along with Goldberg, who transferred to Merrimack in 2013. Goldberg had worked on the air and in marketing at her former insititution.

Tiemann offered enthusiastic support, including space in Cushing Hall to build the studio.

Turner, who had a radio show during his college days, sees the studio as an opportunity for students to open discussions in ways that haven’t been done on campus before. He likens the potential for opening dialogue and sharing personal ideas to the disc jockey in the classic move “American Graffiti,” who has such a personal connection with his audience throughout the movie.

“I would say it’s one of those classic college experiences to be on the radio,” he said. Associate professor of chemistry Stephen Theberge is an enthusiastic supporter and is acting as a co-faculty advisor, Turner said.

Vassallo graduated in the spring and Goldberg will finish her requirements as a communications major at the end of the semester, so Giammasi will take over as president of the radio club next semester.