Two students from Merrimack College competing against peers from around the world earned top honors in the international 2019 X-Culture Global Symposium business management competition in Calgary, Canada in July. 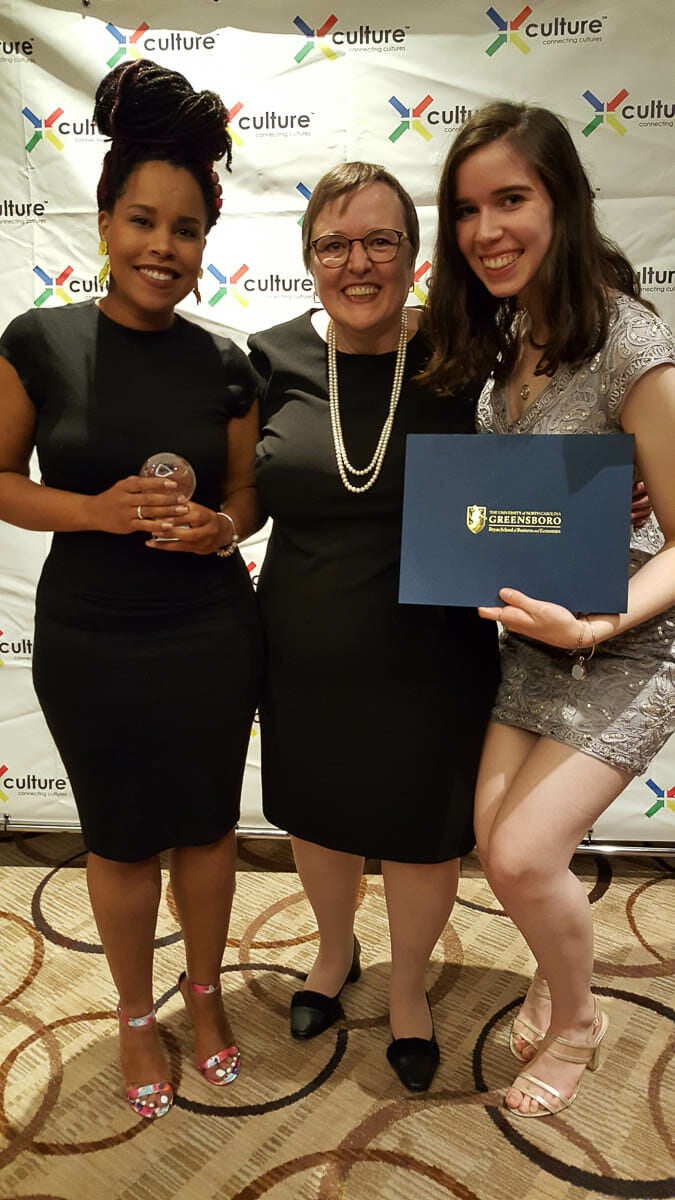 Dayra Perez ’18, was named one of three winners and Caitlin Broderick ’19, just missed out by the width of a “candy bar.”

Only about 150 students from around the world were invited to the symposium. Once they arrived in Calgary, the students were divided into teams and told to develop expansion plans for one of three real-world companies.

“It was a priceless experience for the students who took part,” said Girard School of Business assistant professor of management Valerie Bell. “They met all these students from, probably, 150 countries around the world and got to live with them, experience their cultures, learn from their experiences and ideas, and learned the value of those ideas.”

Broderick’s team chose to develop a multi-pronged plan, including sustainable “glamping,” which is glamorous camping, for Lake Louise Ski Resort.

“We came up with a lot of environmentally sustainable options they have for glamping, such as solar panels to heat yurts and target millennials and young people,” Broderick said after returning.

Judges were in a bind after ruling Broderick’s team tied with another team. Then a student from Ghana who was on the other team told judges he’d made custom labels for chocolates he’d bought as gifts for family but weren’t sold with labels identifying them as products of Lake Louise.

“He had actually created a label for the chocolate bars and since he had gone through this extra bit of work they awarded his team first place,” Bell said. “Caitlin literally lost by a chocolate bar.”

Perez’ team expanded on a business plan already in place for a 49-acre tract owned by the Calgary Municipal Land Development Corp. that will be used for condominiums, apartments, restaurants and some retail shops. The team of students suggested an additional building on the site that can be leased or rented by volunteer groups on an as-needed basis, Bell said.

“The city absolutely loved the idea and said they would start to put plans in place the following day,” Bell said. “They were that excited about it.”

Bell had students in her international management class last fall take part in the X-Culture competition that was coordinated by the Academy of International Business. The competition was an experiential learning project in which teams of students applied theories they learned in class to real-world business and marketing challenges for international corporations. Teams developed 25- to 40-page plans detailing how to break into new international markets for one of 12 companies.

Students in Bell’s class were divided into separate teams with teammates from around the world. There were 144 five- and six-person teams.

The winners of that competition were invited to the symposium in Calgary. Perez, Filippo Begliardi-Ghidini, Riley Sorenson, Lars Sund, and Gelda Tarr were each on winning teams. Only Perez was able to go so Broderick was added as an alternate.