This professor proved he’s a road warrior, running 100 miles in 24 hours for charity

Running 100 miles was not in visiting assistant professor of physics Aaron Adair's plans when he showed up at Lawler Rink to take place in the Merrimack College Road Warriors 24-hour run challenge during Relay For Life April 15-16. But that's exactly what he did. 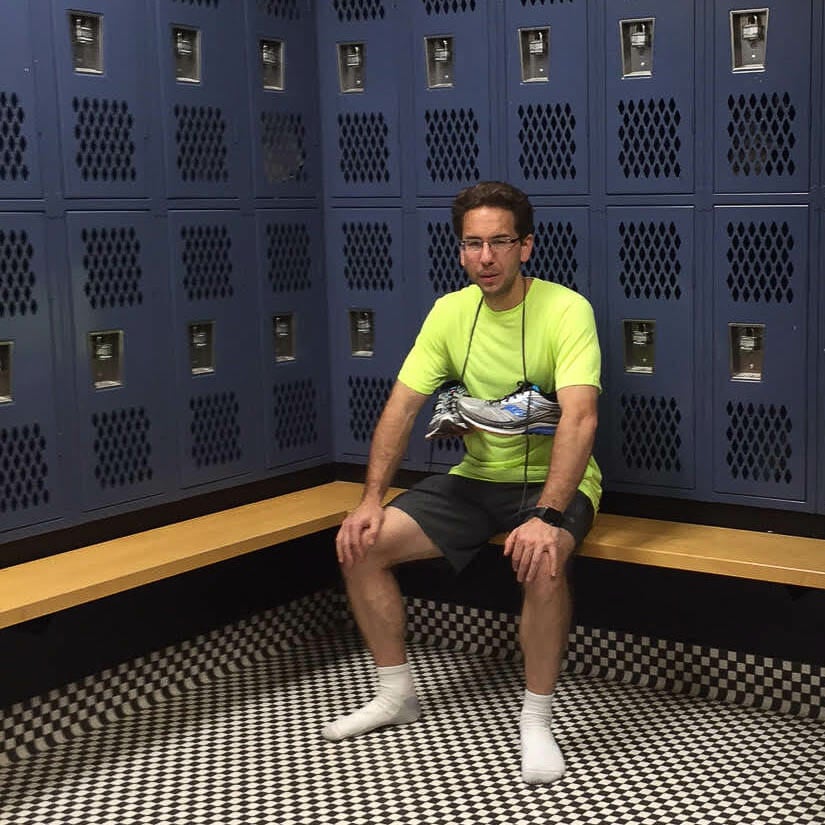 The Road Warriors is a faculty running club founded by professor of Religious and Theological Studies Warren Kay in 2005. Team members started taking part in Relay For Life, an event run by the American Cancer Society to fight cancer, five years ago.  They take turns running 24 consecutive hours, ending at the conclusion of Merrimack College’s Relay For Life.

“We make sure that someone is running at all times. To do this we have a symbolic sash that one person wears. When that person takes a break, he/she passes the sash on to someone else. That sash is constantly moving for the entire 24 hours,” said Kay.

Adair and other faculty began their 24-hour run at 6 a.m. on Apr. 15. Adair didn’t know how far his body would allow him to run. He even brought sleeping gear, including ear plugs and an eye mask with the idea of taking naps along the way. That never happened.

“When I saw I was able to do a marathon’s length in about four or five hours, I realized if I project this out, [running 100 miles] was in the realm of possibility,” said Adair.

So Adair set his goal to finish the 100 miles within 24 hours.

He zoned in and out of the event while running, listening to both the music and the activities that going on around him. It was also an opportunity to chat with other faculty members who were participating.

He made sure to take necessary breaks during his run but his calf muscles cramped during the breaks, which made walking difficult. Adair had to fight through the pain to keep running. Sometimes during the breaks, he gave  his students who walked past him physics questions based off of the course material they were learning in his class.

Adair entered his final laps to reach 100 miles just 15 minutes before the 24-hour mark. Adair had Kay ask the DJ at Relay For Life to put on the theme song to Rocky, “Gonna Fly Now,” by Bill Conti.

“When that started playing, I decided ‘all right, might as well throw everything I have into this,” said Adair.

He hoped to finish at the end of the Rocky theme song so he could to run up the bleachers steps and reenact the signature Rocky fist pump and jump. It motivated Adair to pick up his pace, surprising even himself that he had enough adrenaline left for the final kick.

The Relay For Life walkers and runners gathered at the finishing line during Adair’s final lap. Everyone was shouting and cheering for him, giving him that final motivation that he needed. The famous Rocky scene was recreated on the bleachers while everyone went wild and surrounded Adair to give him a complete congratulation for his feat.

Even after Adair finished the 100 miles, he ran ten more minutes so he could finish the 24-hour run with the remaining faculty members.

“We were all happy for him” said Kay, “But Dr. Adair is a good runner and an amazing person. He runs many, many miles each week. I knew he was capable of such a feat, but was still exciting to see him actually do it.”

Adair left Relay For Life waddling down the stairs in an effort to make it to his car. The remaining Saturday consisted of taking it easy in order to recover, which included barely walking around his apartment. By Monday he was already running again.

“I don’t recommend running 100 miles. I’m just lucky my feet ended with some blisters and bruising. The fact that I didn’t blow out a knee I think is lucky,” Adair said. “Don’t try this at home.”