Twin Sisters Vie for Shot as NESN’s ‘Next Producer’ 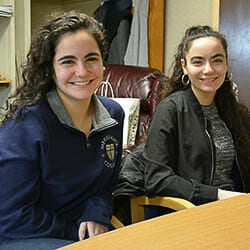 Hannah Reilly is a communication major who plans to minor in general psychology, while her sister Emily is undeclared but is leaning toward math. The freshman twins took a film class during their senior year at Triton Regional High School in Byfield, Massachusetts, then joined the Film Club at Merrimack last fall. NESN approached the club in September, looking for contestants.

“We were both iffy about whether we wanted to enter anything because we were still adjusting to campus,” Hannah said. “We didn’t even know where the buildings were yet.”

Emily was the first to commit and pestered her sister until she agreed to take part. About 10 days before the deadline, they went to Sparky’s with a laptop to hash out ideas for a film.

With no experience in sports news, they decided to have some fun and create a short feature, “The Last Putt,” about a miniature golf grudge match. They enlisted the help of Hannah’s boyfriend and another friend, both of whom acted in the film. Using a Canon Rebel T3i, the sisters shot scenes on and off campus, including the dramatic showdown at a miniature golf course in Ipswich, Massachusetts.

“It feels amazing. A little surreal, honestly,” Emily said. “It’s been such a great opportunity, even if we don’t make the top three. It has just been so much fun working with Hannah, and to be in the top 12 with her makes it even better.”

All of the semifinalist videos are online, where viewers can vote for their favorite. The winner of the popular vote will receive a $1,000 prize. To view the Reillys’ video and vote, visit the NESN website.

To determine NESN’s prize winner, celebrity judges will select their own top three finalists, and each will be required to make a 60-second Red Sox promotional video that will then also be judged. The winner, or winners, will receive $20,000 and a job opportunity at NESN.

For the third straight year, the judges will be two Hollywood producers: Tom Werner, the Red Sox chairman; and Newton, Massachusetts, native Brad Falchuk, the co-creator/executive producer of popular shows as “Glee” and “American Horror Story.”