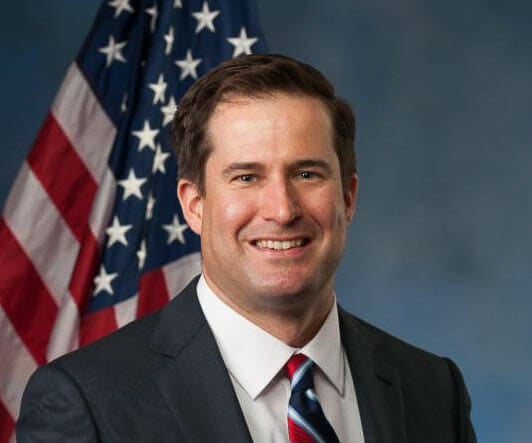 “If you had told me I’d be a United States congressman someday, I would not believe you,” he told a capacity crowd of faculty, students and community members at Cascia Hall.

The Salem, Mass., Democrat explained that he grew up the son of Vietnam-era war protesters who taught him the value of service to others, so when he was close to graduating Harvard College in 2001 he started looking at the Peace Corps and other service organizations to join.

One of Moulton’s service options was the U. S. Marine Corps. It wasn’t popular with his parents, he said, but he respected the dedication to duty and honor at the heart of the Marines’ creed. He met with Harvard’s minister, the Rev. Peter Gomes, to discuss the idea. Gomes wasn’t any more enthusiastic about the career choice than Moulton’s parents, but he recognized the motives.

“He talked about how it’s not enough to believe in service,” Moulton said. “You have to give back.”

Moulton chose not to turn back when Al Qaida struck on 9/11 but began his training in the winter of 2002 thinking he’d miss the war.

He ultimately served four tours of duty in Iraq.

“It was over the course of these four tours that I saw some of the failures of Washington,” Moulton said.

Moulton got out of the Marines as a captain and decided to challenge nine-term Democratic incumbent John Tierney in the 2014 primary and pulled off the upset after a chaotic campaign that saw him come back from 56 points down in the polls.

Now Moulton serves on the Armed Services Committee, and the former platoon commander questions the military’s highest-ranking generals on strategy and budget issues.

“It was an unusual path to politics but one I think a lot of people can follow,” Moulton said. “The path I took to get here was actually straightforward. I just wanted to serve.”