‘Up and coming’ Merrimack in top 10 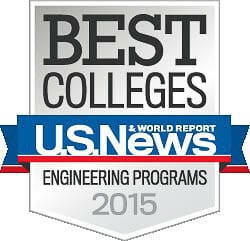 The rankings are based on such measures as freshman test scores and retention rate, graduation rate, class size and alumni giving rate.

A significant part of the ranking is “peer assessment,” in which presidents, academic and admissions directors of the region’s colleges assign a score to other colleges based on their overall impression of the schools.

On that score alone, Merrimack tied for fifth place among the 47 colleges in the category.

The same group of education leaders was asked to identify “up and coming” schools in their category. Merrimack was the only college in the region identified as “up and coming,” and one of only five regional colleges called out in the entire country.

The “up and coming” ranking identifies schools that “have recently made the most promising and innovative changes in the areas of academics, faculty, student life, campus or facilities,” according to U.S. News.

U.S. News also cited Merrimack’s engineering department as one of the top 100 undergraduate programs, placing no. 86 out of nearly 200.

Merrimack was cited earlier this year by Money Magazine as 21st in the United States for “colleges that add the most value” to students’ degrees. Money based its analysis of 665 U.S. schools on graduation rates and post-graduation salaries.

The full U.S. News rankings are online at http://www.usnews.com