Allan T. Weatherwax, Ph.D., dean of the School of Science and Engineering, has been named senior vice president for academic affairs and provost at Merrimack College. 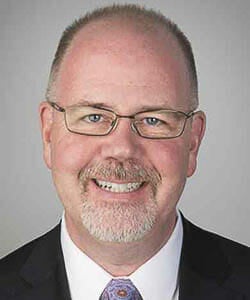 “I’m incredibly honored and humbled by this appointment,” said Weatherwax, a physicist whose work in Antarctica led to the naming of the Weatherwax Glacier and his appointment to the Polar Research Board of the National Academy of Sciences.

“I look forward to continuing Merrimack’s tremendous growth, and to helping the president and the college’s senior leadership plan Merrimack’s future,” he said.

“Dr. Weatherwax will be a great partner in helping us fulfill the college’s Agenda for Distinction and moving Merrimack forward,” the president said. “He has proven leadership ability, a noted record of research and teaching, and the ability to work with faculty, students and external partners to deliver quality, innovative education.”

Weatherwax will become provost Jan. 4, 2017. Professor Cynthia McGowan will serve as dean of the School of Science and Engineering on an acting basis until Aug. 31, 2017. The college will launch a national search for a new dean after the Christmas break.

As dean of science and engineering, Weatherwax has expanded undergraduate and graduate programs at the school, most recently with the announcement of two joint master’s degrees with the Girard School of Business — in data science and business analytics. He led the college’s effort to hire a director of sponsored programs and has brought significant federal and private research grant funding to Merrimack.

Formerly dean of science and professor of physics at Siena College, Weatherwax holds a Ph.D. in physics from Dartmouth College and a B.S. in mathematical physics from Binghamton University. He has been the principal investigator on numerous National Science Foundation and NASA grants, and is currently co-director of the Firefly satellite mission, which is exploring the mysteries of gamma rays produced by lightning discharge.

The appointment comes at the conclusion of a process that drew 90 applicants. After a search committee vetted candidates and interviewed 10 potential provosts, Weatherwax and two other final candidates met with a broad array of college constituencies.

Hopey thanked all applicants for participating and taking the time to share ideas with faculty, staff and administrators.

“It speaks highly of where Merrimack stands in academia that we had such talented academic leaders seek to serve as provost,” Hopey said.