Look, up in the sky! It's a bird! It's a plane! It's a mesmerizing partial solar eclipse of the sun! 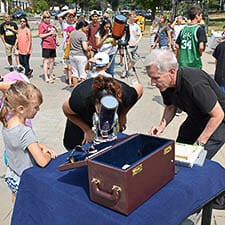 Dozens of faculty, staff and students gathered with campus neighbors at the Crowe Hall courtyard to witness Monday’s partial eclipse of the sun.

Physics faculty members Chris Duston and Doug White worked with student Sam Royston ’18 to set up telescopes that automatically tracked the sun and moon to compensate for Earth’s orbit.

As Dean of Experiential Education Patricia Sendall looked through one of the telescopes, White explained that the black dots she saw were not dirt on the lens but storms on the surface of the sun with 5,000-mile diameters.

The team also provided protective glasses and extra telescopic lenses for viewing the event without magnification. The partial eclipse was live-streamed from the observatory telescope in the Mendel Science Center.

“People were really excited about it,” White said. “It was really cool.”

The total eclipse was only visible along a 70-mile track stretching from Oregon to South Carolina. On the Merrimack campus in North Andover, Massachusetts, more than 62 percent of the sun was still blocked from view.

“It’s a really fun community event,” said Karla Pingeton, an administrative assistant in the School of Education and Social Policy.

In addition to telescopes and glasses, sun gazers brought homemade instruments to safely view the partial eclipse. Some used cereal boxes with pinholes or sheets of paper with holes pierced so the shape of the eclipse would shine on the ground. Others crisscrossed their fingers in the shapes of hashtags to see the eclipse’s shadow on the ground.

Retired teacher Carol Schutz visited campus with her daughter and grandchildren after hearing about the public viewing on social media.

“We’ve been excited about the eclipse, so we decided to have some fun,” Schutz said. “It was a welcoming invitation.”