Campus News › With his graduate degree in hand, Fr. Kenneth to leave for his native Nigeria
Quick Links
Previous Article The fun begins with the Summer Fun Series featuring music and theater July 28
Next Article Hands to Help distributes school supplies to hundreds of children August 8

With his graduate degree in hand, Fr. Kenneth to leave for his native Nigeria

The Rev. Kenneth Eze, OSA, is scheduled to return to his native Nigeria this month after spending a year at Merrimack College earning a graduate degree in higher education. 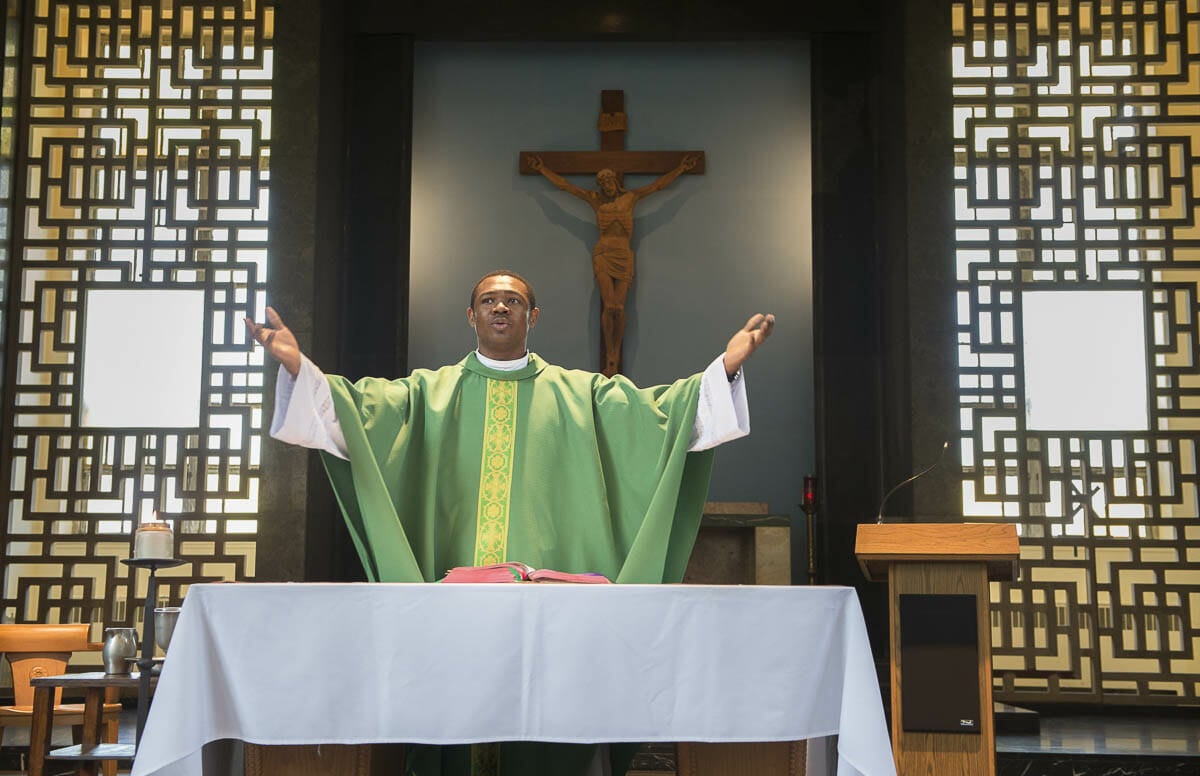 “I have really enjoyed it, no doubt,” he said. “The biggest adjustment I had to make was the weather.”

Fr. Kenneth was a welcome celebrant at noontime Masses in Our Mother of Good Counsel Chapel where his homilies have typically built in a crescendo of joy and passion.

In the classroom, he’s made friends and expanded his educational horizon.

“Being back as a student is quite an interesting thing,” Fr. Kenneth said. “I had to readjust again and put myself back to understand I am a student, not a teacher.”

Merrimack has been a bit different than his undergraduate studies. There is more interaction in the classroom and more field research at the graduate level.

Fr. Kenneth is uncertain of his next assignment but teaching wouldn’t be a bad idea. He was a volunteer teacher for two months at his first parish and fell in love with the job.

He came to the United States last August and was struck by the cultural differences. As each season passed he grew increasingly comfortable with the New England way of life and culture. However, coming from a warm climate, winter was not that much fun for him.

“This is the first time I’ve been this far from home and stayed this long,” he said. “It’s been an experience.”

Fr. Kenneth grew up a soccer fan and recently attended his first Red Sox game at Fenway Park with other Augustinians living at St. Ambrose Friary.

“The baseball game, I noticed, is a big deal,” he said. “I confess, it was great but took so long.”

Fr. Kenneth knew as young boy that he wanted to be a priest. It’s difficult to articulate the calling to the priesthood but it was unrelenting and he started his vocational journey as an altar server, he said.

He went to public high school but based on his desire to be a priest, he transferred to a mission high school. From there, he attended St. Thomas Aquinas Major Seminary where he studied philosophy. After three years as a postulant he attended novitiate for a year of spiritual discernment, then professed his first vows in 2006.

Fr. Kenneth studied theology at St. Augustine Seminary and was ordained in 2010.

He expects to return home in mid-August.