When Joy Harjo was recently named national poet laureate there was a wellspring of pride in the Women's and Gender Studies Department. 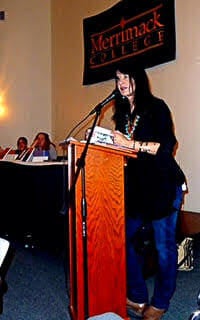 Harjo visited Merrimack College in 2010 as the featured Women’s Week speaker. She made a lasting impression within the campus community and continued her relationship with the school.

“It was like an old friend got the recognition she deserved,” said Women’s and Gender Studies Department assistant professor Debra Michals. “She is a friend of the College.”

Michals remembers Harjo as a brilliant writer, creative performer and passionate activist who inspired students and encouraged them to give voice to their own truths. Harjo had a frank discussion with students about life dreams and ambitions and the courage needed to follow their own paths.

Harjo even had a profound impact on Michals’ own writing.

“Every time I struggle as a writer, as most writers do, I remember the conversation I had with Joy Harjo about the writer’s quest, and I hear her telling me that writing and telling our stories is the source of our power,” Michals said. “I came away so moved by the power of the written word – of her brilliant storytelling and poetry – to open minds and hearts.”

Harjo is a member of the Muscogee Creek Nation and the first Native American named poet laureate. Merrimack professor emeritus Gordene Mackenzie and Harjo were the first two graduates of the creative writing program at the University of New Mexico in the mid 1970s. The poet, actress and playwright’s relationship with Merrimack started in 2010 when MacKenzie invited Harjo to speak, read her poems and perform her then-new play “Wings of Night Sky, Wings of Morning Light” accompanied by Grammy award-winning musician Larry Miller at the College’s Rogers Center for the Arts.

MacKenzie and the Women’s and Gender Studies Department collaborated with the United American Indians of New England and Native Programs from the New England Foundation for the Arts to organize Harjo’s appearance. Annawon Weedon, an award-winning actor and member of the Massachusetts Center for Native American Awareness, performed a welcoming ceremony for Harjo before she performed her play.  Mahtowin Munro, the co-leader of United American Indians of New England, introduced Harjo at a welcoming luncheon.

“As I looked around the standing-room-only luncheon where Harjo read her poems and spoke, I was moved to see students, faculty, the wider community and Native communities in conversation,” MacKenzie said.

On behalf of the Women’s and Gender Studies Department, MacKenzie presented Harjo with a handmade Southwest turquoise necklace with hand-carved animals in recognition of the work she does.

“Harjo wrote to thank the Merrimack community for the very positive experience. We made friends for the College,” said MacKenzie.

Merrimack’s relationship with Harjo continued when MacKenzie and her students traveled to New Mexico in order to work with writers, artists, activists and environmentalists, including Harjo who spoke with students about writing, story-telling and gender.

“Joy was very generous and met with our students,” MacKenzie said from New Mexico where she moved after retirement in 2016. Mackenzie was the recipient of the 32nd Edward G. Roddy Outstanding Teacher Award the year she retired.